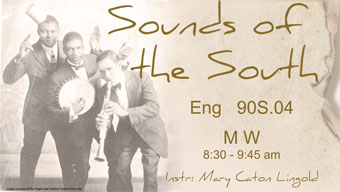 Sounds of the South

Listed in ACES under “Special Topics in Literature”

This class is about hearing things. Hearing what you read, hearing what you see, and listening to what you hear in the South. We’ll bend our ear to the nuances of dialect, style, and tone in an array of literary and musical soundscapes, from Zora Neale Hurston’s Their Eyes Were Watching God to Bill Monroe’s Bluegrass Boys. In addition to reading a novel and short stories, we will study oral histories, listen to a variety of music genres, and watch iconic film representations of the South. Through these explorations, we will ask, how does a region come to be imagined and why is the cultural imaginary of the South so particularly audible? And, how do the sounds of the South relate to history, visual motifs, and especially, constructions of race?

The materials for this course will all represent “The South” in some way, but we will take this concept quite broadly and consider Southernness to be something that is up for debate. For example, you could argue that the American South really begins in the Caribbean and extends far north into the urban centers of the upper Midwest. There is also a great deal of diversity within the typical borders of the region. Consider the differences between, for example, the quintessential sounds of Appalachia and New Orleans.

In this course, you will develop your ear and learn to distinguish and describe musical, literary, spoken, and environmental sounds. In addition to writing informal blog posts, you will produce a radio-essay and research original material from a local archive such as the Center for the Study of the American South that will be written about in a final multi-media project. Students will also have the opportunity to be involved with the Franklin Humanities Institute’s Audiovisualities Lab. Can you hear the fish frying, banjos plunking, screen doors slamming, bull frogs croaking and bug zappers zapping?  No exams.