Over the past two years, the BorderWork(s) Lab has worked closely with the Nasher Museum to plan a trio of related exhibits on the human consequences of the creation and regulation of borders. One of them – Pedro Lasch, Susan Harbage Page and Yinka Shonibare – opened in late July. We are thrilled to announce that on Thursday September 19, Lines of Control: The Partition as a Productive Space, will open along with Defining Lines: Cartography in the Age of Empire.

Lines of Control is a major traveling exhibit of (mostly) South Asian contemporary art that explores, as its subtitle signals, the idea of partition as a productive space – a space where nations are made through forging new identities and relationships; reconfiguring memory and creative forgetting; re-writing history and the making of myths; and through the creation and patrolling of borders. Defining Lines is curated by a team of BorderWork(s) undergraduates who have previously organized Mapping the City: A Stranger’s Guide at the Perkins Library. Below we have put together a handy list of events related to all three shows, including gallery talks featuring our students and faculty. Please join us!

BorderWork(s) @ the Nasher Exhbitions and Events (all events are at the Nasher except Susan Harbage Page talk):

Also see this Nasher Museum’s e-postcard for other events related to Lines of Control. 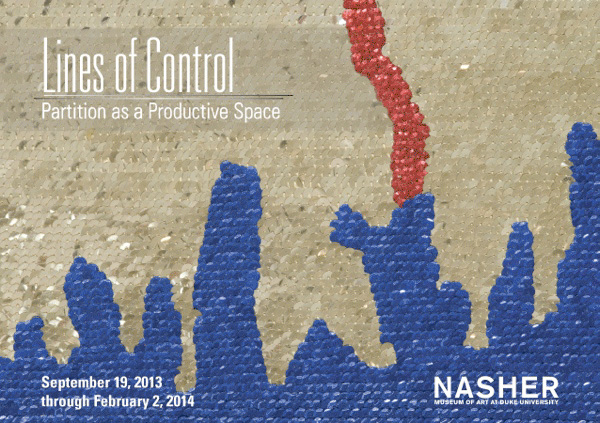