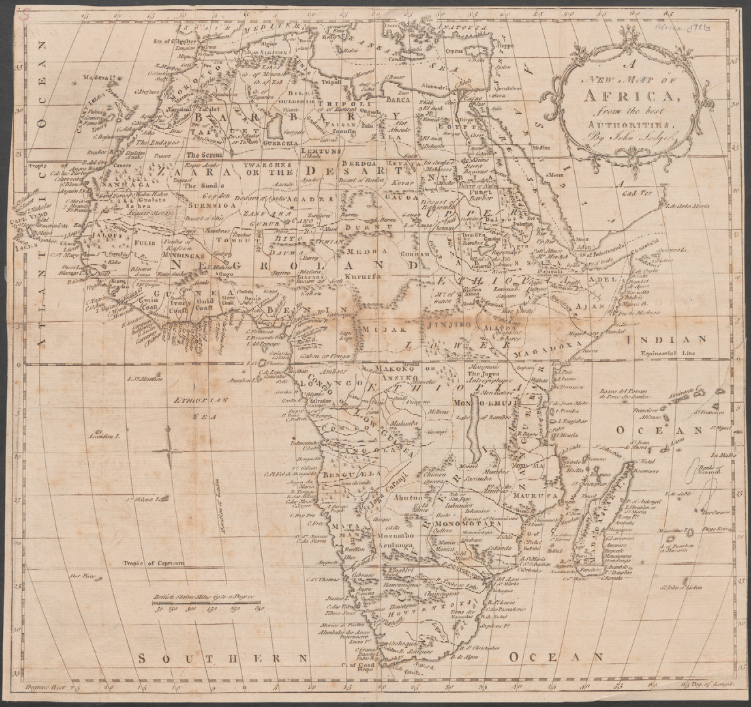 Although an exact date is not available, John Lodge’s map of Africa was produced sometime in the 1780s. Lodge himself was not a cartographer, but rather an engraver who produced a variety of different works, from- individual maps and pieces commissioned by specific publishers to maps included in inexpensive periodicals such as the Gentleman’s Magazine and Political Magazine. Although in 1761 Lodge advertised himself “to the nobility, clergy, gentry & others,” he never reached the prominence of cartographer Thomas Jefferys, to whom he had apprenticed and who had been appointed Geographer in Ordinary to George III.

A Long Line of Maps from “the Best Authorities.”

This map was not a new creation of Lodge’s by any means, but seems to have been one of many variations upon a popular map of Africa that circulated widely among 18th century cartographers. A 1736 map of Africa by cartographer Herman Moll might have been the original upon which all the copies were based, and by 1747 cartographer Emanuel Bowen had released a map of Africa whose distinctive demarcation of (fictitious) African kingdoms and inclusion of place names would appear almost unchanged on subsequent versions of the map. For example, Thomas Kitchin, who had apprenticed under Bowen, released a map of Africa in 1770 that copied all the crucial details of Bowen’s older map. Kitchin used the same delineations of (entirely fictional) kingdoms within the continent that Bowen had, and the only differences of note between his version and Bowen’s were a slightly altered coastline and the addition of colors for the individual kingdoms. Ten years later, it was Lodge’s turn to reproduce the map. Whereas Kitchin’s map of Africa was produced for Guthrie’s New Geographical Grammar, there is no indication of the specific context in which Lodge published his version. The map included in this exhibit is uncolored, but a colored version from 1780 exists in Stanford University’s Barry Lawrence Ruderman Collection. Unlike Kitchin, who made small changes to Bowen’s map, Lodge appears to have simply copied the exact lines from Kitchin’s map. By the time this map was published, the geography included in it would no longer have been as innovative and up-to-date as when Bowen published his first variation. Changes in cartographical practice were increasingly inclined towards the omission of information where cartographers were unsure of the specifics or lacked eyewitness sources. Lodge’s map, in contrast, still split Africa into a multitude of individual kingdoms with improbable names in the same manner that Bowen had some thirty years previously. Nor was Lodge the last cartographer to use Bowen’s original blueprint. Philadelphia engraver Matthew Carey was including variations upon Kitchin’s version of this map of Africa in American atlases as late as 1818, when the geographical information would have been grossly out of date.

Maps for a Wider Audience

Within this context, this particular map of Africa, in all its variations, can be seen less as an attempt to present the most contemporary picture of African geography than to bring a rough idea of Africa to a wider population. The fact that Lodge, with his background in less expensive prints, was reproducing this map, indicates that its purpose was to appeal to people on a lower socioeconomic level than the elites and scientists who generally sought out the latest geographic renderings of foreign locations. This is also supported by the relative simplicity of Lodge’s map compared to earlier versions. The lack of color and plain cartouche on the map in this exhibit are alterations usually related to the cost and manner of production, and even Lodge’s colored version is less detailed in the application of color than Kitchin’s map. Maps such as Lodge’s weren’t meant to apprise readers of the latest trends in scientific cartography. Rather, they display the growth of interest in foreign exploration amongst all levels of society, and not just intellectual elites, as well as the role of low-cost maps in familiarizing the public with contemporary British perceptions of Africa.

Strutt, Joseph. A Biographical Dictionary…with several curious specimens of the performances of the most ancient artists. London: J. Davis, 1785(?). Print.