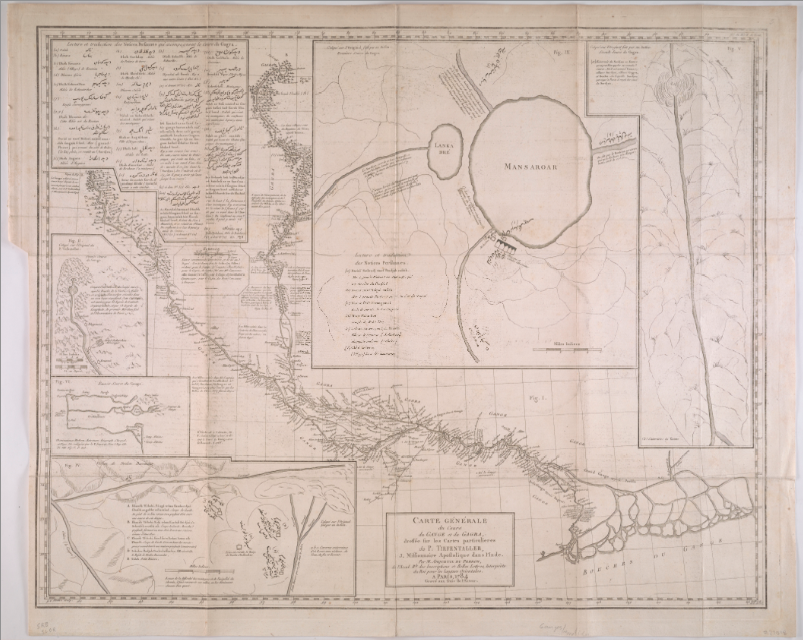 Joseph Tiefentaller was born in 1710 in Bolzana in the Tyrol region of the Austrian Empire.  He became a Jesuit in 1729 and moved to Spain in 1740.  In 1742 he left Portugal for Goa, but was sent to Agra to work at the Jesuit College.  Tiefentaller was unable to return to Portugal or Spain because the Jesuits were expelled from these countries and their order dissolved by Papal Decree in 1773.  In 1756, finding himself without money and without a home, he went to Lucknow, where, supported by the British, he remained until his death in 1785.

In the interim he spent some years traveling, taking notes, and researching astrology, astronomy, the flora and fauna, the languages, the religions, and the customs of India.  Armed with only a quadrant and his formidable language skills, Tiefentaller sent sketches and letters to his friend, M. Anquetil du Perron.  Like Tiefentaller, du Perron had spent time in India researching native religions and languages.  As an orientalist and geographer himself, he recognized the importance of Tiefentaller’s work and presented it at the French Academy of Sciences before publishing some of his maps and writings in Paris for the further education of French scholars.

This map of the course of the Ganges and Ghaghara Rivers, written in French and Persian, is one such map.  Tiefentaller incorporated or reproduced the work of both local peoples and the Persian-speaking Mughal Empire in the six insets pictured on the map.  Figure III, for example, shows the Lake of Manasarovar, the mythic source of the Ghaghara River.  It is unlikely Tiefentaller ever visited the lake in person, as it is located high in the Tibetan Plateau.  Tiefentaller’s consultation of local peoples in the making of his maps was rare for his time and speaks to his impressive language abilities, immersion in local cultures over a long period of time, and scholarly interest in these same cultures.  Though he was a missionary, it is clear from his scholarly work on Brahminism, asceticism, cosmology, and flora and fauna that Tiefentaller was motivated largely by the pursuit of knowledge.