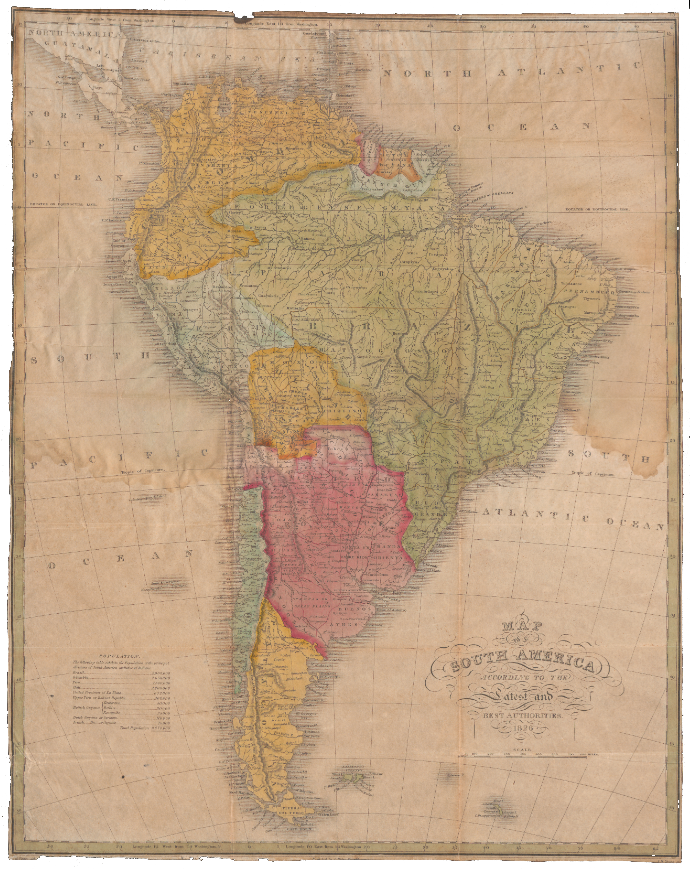 Little is known about Anthony Finley’s life; however, it is clear that he worked in the same Philadelphia publishing circles as Henry S. Tanner, an important cartographer from the early nineteenth century.  Documentation from the David Rumsey collection directly states that many of Finley’s maps and atlases were produced in competition with Tanner’s. Both cartographers lived in a developing United States that had focused its sights on expansion to the west and, less directly, to the south. Tanner is known specifically for contributing to the image that shaped American knowledge of northwest North America while this territory remained a contested space, passing from Great Britain, to Spain, to Russia. He also made American atlases and state-by-state flat maps. Finley followed suit in an effort to keep up with market demand.

Finley’s 1826 A New American Atlas Designed Principally to Illustrate the Geography of the United States of America is a near replica in content to Tanner’s A New American Atlas Containing Maps of the Several States of the North American Union. The Rumsey collection notes that the atlases are grouped in extremely similar patterns and that the quality of cartography and engraving are equal. The significant difference between the two is that Finley’s atlas is on a smaller scale than Tanner’s. To borrow an expression from contemporary language, one could say that Finley’s atlas was a “knock-off” of Tanner’s; however, this does not devalue the historical importance of Finley’s atlas, which, like Tanner’s, contributed to American understanding of politically important regions. A testament to its popularity lies in the fact that Finley printed at least two editions of his atlas.

The Monroe Doctrine and Growth of Interest in Latin America

The inclusion of the Map of South America to the Latest and Best Authorities in Finley’s atlas is evidence of the growing the interest of American ventures in Latin America. The 1823 Monroe Doctrine, a policy establishing American protectionism over the western hemisphere including Latin America, put a halt on all future attempts by European powers to colonize the territory in North or South America. A majority of former Latin American colonies had recently gained independence through the Spanish American wars. While the Monroe Doctrine was an attempt to keep the Old World separate from the New in order to protect the fledgling independent nations, its undertones were, nonetheless, imperialistic. Finley’s map, like others in the American market, provided images of the territory that would now be increasingly subject to direct US political and involvement and economic colonization.

Tanner, Henry S. A New American Atlas Containing Maps of the Several States of the North American Union, Projected and Drawn on a uniform Scale from Documents found in the public offices of the United States Government, and other Original and Authentic Information. Philadelphia: 1823. Villanova Library. Web. <https://library.villanova.edu/Find/Record/1065105>.