On November 6, 2012, I met with Turan Duda and Jeff Paine of AIA NC’s 2012 Firm of the Year, Duda/Paine Architects, to talk about how they see networks at work in their work. We talked about networked working methods, about brain-body-building phenomenologies (how the brain and body read the spaces and buildings we construct), about designing global cities, and about emergent network ecologies in architectural practice.

A highlight of our conversation is here transcribed alongside photos of Wonders and video documentation of a newly-conceived Chinese city.

In 2007, Duda/Paine Architects devised seven design principles, called the Seven Wonders, which were to be the mobilizing design features for a library building concept. Inspired by the library’s themes of Emerging Technologies and Emerging Information, the Wonders – as speculative concept models – were to be the basis of their building construct. Since conceiving the Seven Wonders, Turan Duda says he is “finding now that these issues are pervasive in all the work we are doing now. They are ever-present.” Duda says these Wonders address the kind of phenomenology he finds in the work being done at Duda/Paine and in the work that, for him, can be done with architectural design.

By gazing into the mobilizing concepts for Duda/Paine, we glimpse emerging networks and networked emergence.

Turan Duda: “I wanted to walk into the competition with some issues and ideas that I found provocative and that could generate provocative architecture. So I came up with this idea of the Seven Wonders. 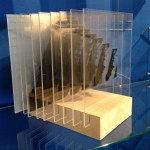 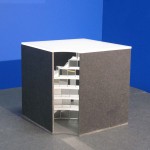 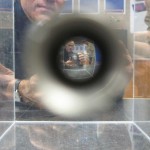 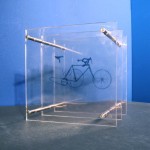 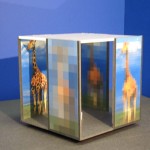 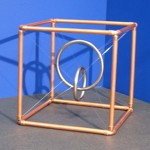 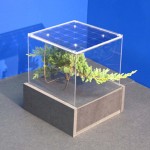 Is it possible for two realms of experience to be connected and independent simultaneously?

Turan: “This one is called Connectivity”

A: “The connections which bind them together…?”

T: “Exactly. So we came up with this model to say, these two realms are interconnected and don’t touch but what holds them together is a third element, which are these networks of cables. I handed this to them [the committee] and posed this question, In today’s world can we be connected and yet not in the same space? This was the first concept.”

Is our capacity for change as much mental as it is physical?

Does your mind take fragments and create a whole?

“This one was inspired by Duchamp. It is about fragments and recognition…How little of something can I show you and have you still recognize the whole? So that is something that fascinates me [as a design concept].

What this is about for me is that as human beings we never experience the whole, we experience things in episodic ways, in cinematic ways, we see parts and pieces and fragments and we put them together in our heads to see what the whole is.

I did an experiment with this once. I taught a drawing class at Yale and one day told my students we were going to draw the British Art Gallery, we walked to the art gallery, walked around, walked through the gallery and around and then walked back. The students asked When are we going to draw? I said, now, I want you to draw what you remember.

What you remember is very different from what you see. We have to do this kind of mental mapping and say I saw this I saw that I saw these fragments and now I have to make a whole out of it. So that was the poignancy of this model, the power of memory.”

“…And how does this process of pixellating information allow me to do both?

So this is about abstraction, it gets back to the question, at what point do I begin to pixelate this image such that I realize it can be either a bird or a giraffe?

So ambiguity is another huge element of what architects think about. Am I in a room? Am I in a hallway, a passage way? Does that oval define the room [points to oval – picture] or am I in a larger room that has an oval as an object in it? Am I in a space or am I looking at an object? That is the type of  ambiguity we deal with all the time …it’s something I love to use when I design buildings. It’s all about the way your spaces flow together and create ambiguity and tension to produce dynamic space.”

Does our increasingly transparent world become a reflection of ourselves?

“There is a bit of voyeurism here…that we encounter everywhere. It is like our phones where one can flip to either take a picture of yourself or a picture of the world. With technology, we are increasingly able to share experiences simultaneously.”

When does a social setting become negated by iPods, Facebook, and Myspace?

T: “In this model, Who is the audience, who is the performer?”

T: “In today’s age when nothing is personal or private anymore, its that same sensation witnessed as a group…We ask, Is it real, When is it real? It is a performance or is it real?

In the world today when transparency exists everywhere reality becomes a performance. So I am always intrigued with that phenomenon [when designing]”

T: “These were some concepts that would begin to generate the ideas for the design of a building that would provoke inquiry.

I think this is why the process is so important because the process speaks to how we address these issues in/with the artifacts that we make.

Tying back into the network idea: I think the most profound element for me is frankly how the mind works. The idea of these nodes of things that are in your brain…and how they ‘read’ buildings…the idea that we read the physical environment and add this to our well-source of ideas that we draw from.”

A: “And how we interact with and act in that environment?”

The Duke Integrated medicine building has been highly orchestrated in terms of thinking about what you see and when you see it and how you walk through it. We call it the path of wellness.”

T: “It’s both. I think it’s about ambiguity. And we very self-consciously ask ourselves, are we making a destination, a room, or are we making a passage through/to the room? Modern architecture pretty much broke that apart and took the traditional concepts of rooms and passages and said we’re going to get rid of all that and think of universal space. I can create flow between walls and rooms [while still creating rooms].”

A: “Carrying this idea outward, how does your design process change when you move from single buildings to larger spaces of networked buildings like campuses and complexes, for instance? Do you think here about networks of nodes (passages) and edges (buildings)?”

T:” We’ve designed a city for 6 million people in China…”

T: “Yes we did. (laughing…) In three weeks. For a competition.

This is where I think of the network. When you say network I can’t help but think a network of memory. For me memory is the key that ties everything together, even the neural network. For me to pull something out of one node in my brain, I need to have the fibers that connect to that one node. It’s all about memory and memory gives it significance. What we did in this city project where we were given a site – an empty bay that they were going to fill in – and we thought first about the history, and memory of cities.

So that becomes the evolutionary cycle of the development of a city – a linear process of development. Invariably what happens is that cities become fragmented into industrial commercial and residential zones.

We asked: What if we took that [pattern] and compressed all of them? And compressed that linear evolution down, compressing it in such a way that it creates a new relationship that creates a mixed-used city.”

A: “You are changing the relationships between the nodes, then?”

T: “Correct. By compressing it, I am creating a new kind of city pattern but I am allowing the parts and pieces that were linear to overlap. I am creating edges, nodes, centers, but also a rich sense of overlap.

The new city then evolved with landmarks and centers. Then I learned something really powerful about the way the Chinese think and the way we think. We as designers, architects, planners have this omniscient point of view of world…that we can create an entire city with a sense of order. The Chinese typically believe the only time that that sort of purity and idealism occur is in the spiritual realm, and that everything else is chaotic and amorphous and episodic. It is a profoundly different way of thinking about the world. So we took that idea and created a series of wholes and complete pieces that are then internetworked by a system that is not repetitive. We wanted to bring chaos to the order.

Here’s the other kind of neural connection that we are going to make with memory: We are going to call this a city of cities because how was I going to generate ‘instant’ history [for the city] in 3 weeks [time he had to design the city for the competition]. So we used models of cities that we know and recognize throughout the world and [the city] will become an amalgam of cities…a city of cities. So we looked at places like Savannah, Chicago, NYC, San Francisco, Boston, Paris and created this hybrid city.

We were yearning to create meaning, we were inventing what we thought would be appropriate. We had to invent a world putting parts and pieces and layers together into a whole.

What I find compelling, though in this process, is that the issues of Seven Wonders emerged.”

We finished our conversation then circling back to designing digital architectures for scholarly communication: the very purpose of this Ecology of Networks project. In talking about this project putting diverse minds together to converge over a shared idea (network ecologies), we discussed the creative in(ter)vention that occurs when different minds – with diverse methods, unique vernaculars, and differing experiences – come together. For Turan, this diversity and interdisciplinarity are key to innovative creation: “Juxtaposition is a central part of the spontaneity of creativity.” And that, for him, is required for innovative architectural concepts to emerge. If we see the world differently, we can teach each other to see the world differently. When the literary scholar can converse with the network engineer and the award-winning architect about how they see networks at work in their own work, novel network ecologies emerge.

*Note: A special thanks is due to Lynn Dunn and Bethany Ratcliff of Duda/Paine Architects for all of their assistance.