Living Network Ecologies: A triptych on the universe of Fernand Deligny 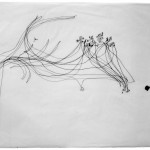 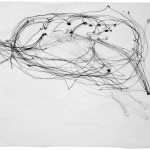 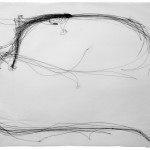 Living Network Ecologies:
A triptych on the universe of Fernand Deligny

Outside of language outside of SELF: L’oeuvre-sans-oeuvre of Fernand Deligny,
an Introduction to the project

The work of the French outsider thinker, Fernand Deligny (1913-1996) has yet to be truly explored in its full richness, peculiarity, and resistant novelty. Deligny was one of those unique individuals who strived to be part of the background, choosing to be an educator and social worker dealing with those ignored by institutions and marginalized by ordinary life. Deligny’s experimental non-works, his cartographic “wander lines,” became foundational to Deleuze and Guattari’s important concept of the rhizome. He would also inspire another of his contemporaries, Michel De Certeau’s work on The Practice of Everyday Life, and Deligny’s film, Le Moindre geste,  closely depicting biographical narratives of young boys escaping from internment in asylum, garnered him attention at the Cannes Film Festival in 1971.

In the last 10 years, new researchers, artists, and writers have re-discovered the peculiar artifacts Deligny has left us. He provided a space for severely autistic, mostly mute children to work through their difficulties by teaching them to make and spin wander lines with no emphasis on reasons of meaning as such and to perform various open ended daily wanderings of “acting” and “doing”. This work can be seen not only as interesting early attempts at what we might call art therapy, but also sheds light on the human’s rapport with the world outside of naming, outside of words and language as such. In the following three-part project, I will provide various entry points in how the interested reader might begin to delve into Deligny’s universe by way of presenting and commenting on several lengthy excerpts from my forthcoming translation of his work, The Arachnean and Other Texts (Forthcoming, Univocal: Minneapolis, 2013).

In focusing on three principal ideas that were crucial for Deligny:  the (non)human network as a mode of being (the mythic Arachnean); the art-without-art of acting and doing from which the cartographies of wander lines create themselves; and finally, the “primordial communism” of a shared commons of the immanent site of living, the reader will be provided a triptych glimpse into the universe of a thinker who defies categories and yet offers emerging Network (and) Ecological thinkers a provocative interlocutor.[1]

Deligny is as much at home thinking with termites and spiders as he is with the Aboriginals who make their turtle paintings for no reason other than the necessary ritual inscribed in the making. And if today, we find ourselves criss-crossing various disciplines of the digital, from media studies to digital humanities to digital network ecologies within a world of cybernetic satellitic guided flows, Deligny’s oeuvre-sans-oeuvre can perhaps be seen as a poetic attempt at placing himself and the reader within such a universe, outside of language and outside intention, a site of living where the attempt at reducing violence and preserving “the commons” is of the utmost importance.

What I would like to do, what perhaps I have no other choice but to do in the end, is to spin the web of the Arachnean, to spin the network of cartographic tracings of Fernand Deligny: outsider thinker, experimental filmmaker and perhaps more aptly described as musical conductor of wander lines. And so, in the coming months, while completing the translation of Deligny’s singular oeuvre-sans-oeuvre, L’Arachnéen et autres textes, I will try to sketch cartographies, poetic webbings, network aphorisms of the human and the network as a mode of being in order to, shall we say, continue to the spin lost stories of the Arachnean, the mythic outsiders of the network.

For Fernand Deligny, there is a position of existence that exists in a kind of exo-sphere, the territory of the so-called Arachnean, a mythic nod to the spider who weaves her web not by reason or for meaning but merely to survive or perform the act of the network. Deligny was quite aware from an early age of the errant lines of the human network. And it is the network viewed simultaneously through a “human” lens and a “human” lens more akin to a becoming-animal in the work of Deleuze and Guattari that is of interest for him. For Deligny, the network is a mode of being.

As Deligny placed himself and his interests in what we call the outlands, in the marginalized exo-spheres of human existence, he found himself within a web of human networks, hovering around—and integrating himself into—a group that already found itself within an exo-sphere defined by the members’ autistic rapport with the outside.

In the three examples, above, of the tracings of mapped cartographies of the quotidian errant wanderings of the children under Deligny’s care, one is astonished by the suprising, simplistic beauty and similarity with today’s 21st century digital cartographies of social networks such as Facebook and Twitter. One can perhaps begin to wonder to what extent our daily errant silent wanderings within the synchronized digital network landscape mirrors these early attempts at mapping a world outside of language, striving merely to mark the tracings of open gestures of everyday mobility.

But unlike most of the current discussions on networks in play within social media, mobile devices, wireless cybernetic webs of synchronized wandering, updating, and artificial intelligent satellitic navigation, we can and perhaps should, now more than ever, return to his cartographic sketches and listen to the aphorisms and poetic spun stories of Deligny’s network as a mode of being. For within the oeuvre of this ardent reader of Melville, Artaud, and former colleague of Guattari, we find the remnants of a poetic experimenter and forerunner of network culture providing a curious artifact and lost history for social-media ecology.

The pacifistic resistance to claiming Identity which Deligny always believed was used by power structures and which no one truly owns becomes a bit paradoxical when we begin to re-evaluate him as an author of texts. Deligny scholar, Sandra Alvarez De Toledo, notes quite well, it is somewhat counter-intuitive:

“To celebrate his name while he investigated a language without a subject, a language of the infinitive, which would have gotten rid of the “oneself”, of the “myself”, of the “he”. A language of the body and of the agir, both concrete and contorted, repetitive in a ritornello-like way, cultivating opacity for fear of being understood or poorly understood. Deligny’s work is precisely the image of a process of detachment from oneself and from the One, through the work of writing and the indefinitely began over and over again research on a specific commons, targeting the acts of violence of the course of history.”[2]

Deligny’s universe is one in search of the world outside of language and violence. He chose to abandon psychoanalysis and the La Borde clinic where he worked with Felix Guattari in order take care of mostly-mute children with autism, at a time when no one wanted to give them a free place to wander. Deligny has left us with remnants of this time in the form philosophical inquiries into the possibility of a world outside of self, auto-biographical narratives and cartographies of what he will simultaneously name in French the SE voir and the CE voir—of SELF seeing and THIS seeing—a poetic attempt at seeing the radical immanence of existence outside of language and self. Accompanied by the help of mostly un-educated caretakers from the working class, he did not try to make those under his care conform to some sort of specified existence. He directed those around him to closely watch over the “lignes d’erres”, the “wander lines” and instructed them to carve, trace, and mark out cartographies that had no reason or meaning for being except to be woven. I now provide a small excerpt:

This is merely the beginning of a poetic and candid reflection that is itself a “wander line”, like its author, it is an unclassifiable text striving for a vernacular for those who do not speak. Deligny’s work has found new life in recent projects from thinkers such as Erin Manning and Brian Massumi, as well as in political thinking found in the writers of the progressive French philosophy journal, Multitudes. Deligny never had what he called a “thought-out” project being more concerned with what he called “l’agir and le faire”. The acting and the doing were about the living practices of projects as process, where the vouloir, the desiring of some specific thought out project, was ignored for a way of living and creating that strived to reduce the violence of desiring and prescribed  ways of living and controlling environments.

As Deligny reflects back at his life and his oeuvre-without-oeuvre, he acknowledges what he calls a “primordial communism” of a shared lived commons outside of language and outside the violence of language and naming as such, and he understands life as a network and the “network as a mode of being”.

[3] The original French is “pour que le mode devienne la mode”. Deligny is playing off the various meanings of the word “mode” in French which can mean both “mode” and “fashion” or in this case I have chosen to render it as trend: The masculine form being “mode” and the feminine form of “mode” being fashion.