Living Network Ecologies Part 3: You can gaze at 10,000-100,000 hands writing: Fernand Deligny in the age of social networks 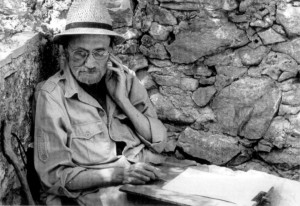 “It still remains that there is writing and there is the what. The what, the contents of the book, what it will say, about what is written is obviously essential; what remains is to write which is Arachnean. You can gaze at 10,000–100,000 hands writing: they do the same thing. There are nonetheless several differences between the spider and this by which a hand, fingers, become legs and the palm becomes the written body; the thread of words does not shoot out from thread-shoots located at the beginning of the wrist; we had to learn to write.”

Deligny, The Arachnean and Other Texts forthcoming from Univocal Publishing

If Deligny’s writings found within The Arachnean and Other Texts continually oscillate between what he calls “the-man-that-we-are,” the human imbued with language and self-awareness (albeit false), and the so-called Arachnean, the (non)human being whose innate weaving and “acting” is pre-linguistic or at the least, does not take language as its “dwelling,” then unlike many of his contemporaries who embraced language as the dwelling of being and the narrative nature of existence, Deligny sees within our world dominated by language and perhaps now media of all sorts, a world where we are constantly confronted with an overarching yearning for sense making. Has the human that we are become arrogant in this undertaking of what Deligny names Se Voir, self seeing, (the being conscious of being) and not Ce Voir, a this seeing, which hesitates, and is uncertain about “self awareness” and claims of authoritative naming with which sense is made and where Deligny claims, we discover a violence of wanting?

However, by comparing 10,000–100,000 human hands writing to the becoming animal of the spider, Deligny is suggesting it is perhaps necessary to revaluate man’s relation to sense making, where writing should perhaps be viewed of a different poetic nature, where the human becomes a humane inhuman. Writing here is possibly an expression of the innate, and is thus not about “making” sense but is merely the innate ritual of “acting”, the mode of the Arachnean. It is what Deligny would call “a-conscious”, outside the conscious or subconscious. As the Brazilian philosopher and Deligny scholar, Peter Pàl Pelbart states,

“Deligny refers to the turtle traced by the aborigine in a tree’s bark, then abandoned–the essential there is the tracing, the movements of the hand that come and go, not being this “his” hand, just as the web is not this one spider’s…and our emotion comes from the fact that this drawing is common; a sense common to us, human, since the human has for common the hand in motion. Common, communism. When conscience is eclipsed it is worth looking, as if at a lunar eclipse, and what is seen, even if it is not visible, are the traces of the Arachnean.

To put it excessively abruptly, Deligny’s problem is not one of the assemblage of desire, but of the innate, of the pre-linguistic, of the a-conscious, of what he calls humane, and that Deleuze and Guattari would call inhumane. Conversely, one could say that the reticence in relation to language, to the significant, to interpretation, to structure, persist entirely, despite the different conceptions they have on the status of language.” [1]

Within the digital networks of millions of “hand(s), fingers, becomes legs, and the palms become the written body,” is perhaps where the utterances where digital social networks need to be evaluated as having more to do with an innate acting than a sense making, i.e. more to do with a poetics of being than any kind of self-aware truth claims of expression, where intention would be seen. Where wanting (to make sense) would emerge.

Instead of wanting, there can perhaps be found in the mode of the network, a position outside of language proper and outside of self (interest) that would strive to create a space for common shared existence where those involved had a profound detachment from the others, except for providing some sort of meal or necessary utility, coming every now and then to place on the stone table at the site of living in the Cevennes some sort of goods, those within the network were not concerned with any thought-out relation or project. It is within “acting” in an innate, unattached manner, keeping a distance from one another, that the network was spun

“[…] anyone who came from one of the distant collectives and passed by the silk farm would place, lettuce, blackberries or cheeses on the stone which were from another collective, and then would take back with them whatever had been placed by someone else on their own collective’s stone. For the most part, all of this took place without anyone else being present besides the passerby from the collective.”

A profound detachment to naming and to others at once proximate and distant. Wanting was left aside for innate gestures of exchange. But as the Arachnean web was spun, as the network continued to weave itself as mode of being, Deligny’s poetic recounting indicated that something nevertheless emerged, a ritual customary living that if  told in the form of a narrative, in a precise manner, would not be so different than the relation the Aborginals had to their ritual practice of art creation. While they are mentioned briefly in Deligny’s text, the figure of the Aboriginal nevertheless plays an important role for Deligny concerning the Aboriginal’s reliance on art practice as “acting” and not as a thought-out project of “making”, engaged simply in a ritual creation of their artwork and turtle paintings: it was not about the finished painting but the customary process and ritual of the practice itself. For Deligny, the network as a mode of being was a similar innate practice of living. It was within the detached ritual of exchange of the network as mode of being that it gained its strength.

“And then the stones were replaced by the beam which had been the master-beam for a demolished house. The customary coming from the stones persisted upon the furrowed gray wood of this crudely squared beam, until the day came that when the customary ceased; the passersby would sit and talk and exchange information, something which a socio-ethno-psychologist would have concluded the network accessed at superior level.

However, several years later, I learned that when the beam was in use within the customary of the network, the legend had taken the form of language, the collectives preached that the network lived off the mode of exchange, an archaic mode and obsolete tradition considered to be in good taste by everyone of the network, all of whom had an engrained distrust of money; so it was that a rough solidarity was practiced to speak like those who speak of the painted turtle on bark somewhere in far off Arnhem Land.” [2]

[1] From Peter Pàl Pelbart’s afterward to the forthcoming, The Arachnean and Other Texts, by Fernand Deligny, trans. Drew S. Burk, Univocal: Minneapolis, 2013)