As Lev Manovich argues in his essay “Abstraction and Complexity” (2007), the new image of our increasingly complex world is the one “as the dynamic networks of relations, oscillating between order and disorder” (Manovich, 2007, p. 352). One of the central ideas and abstractions of the digital media ecology is thus the idea of the dynamic network that nowadays is virtually everywhere. And on a very fundamental level the network is at the core of the information society we live in: the network as basic hardware infrastructure of the Internet as network of networks, the controlling the flow of information. The Web 1.0 as network of hypertext-documents, the Web 2.0 as network of data, or lately Web Squared as network of semantics, locations or things. Thus in the end some core elements of our digital environment such as the database as cultural form (Manovich, 2001) or a publication in the widest sense can be abstracted as a network of relations between digital assets, in short data – which is in its nature an abstraction itself. And the idea even reaches out into theories of knowledge-generation and learning such as connectivism.

Besides looking at digitality as abstraction, software-abstraction (Manovich, 2007, p. 346) is also a way to make layers of complexity with its richness accessible in a meaningful and understandable way. The activity of traversing and understanding complex network structures of data and knowledge becomes manageable through software interfaces. In our paper, we will trace different approaches to this task with a primary focus on our Networked Ecologies project. As a case study, the Networked Ecologies project puts our interrogations into artistic/critical practice as we are thinking “through, with and alongside” (Hayles, 2012, p.1) the theoretical and scholarly implications of layered digital abstraction, complex dynamic networks, and scholarly rigor as they are applied to innovative digital publication.

Though Amanda Starling Gould was unable to attend physically, she created  a virtual presence (that, importantly did not rely on Skype or even a working Internet) by recording a slide-by-slide audio presentation that allowed Florian – our fabulous on-site presenter – to remix and creatively perform alongside her voice & slides. Instead of relying on an unstable web connection, and instead preparing a video or a single audio presentation, Amanda created a short audio clip for each slide. Florian could then talk to/with her in his well-practiced performative way. For the first half of the presentation, Florian prepared a comprehensive introduction that outlined one avenue of our project’s theoretical trajectory. In the second half of the presentation then Amanda presented the Network Ecologies Project as a case study that, as we say above puts our interrogations into artistic/critical practice as we are thinking through – and experimenting with – the theoretical and scholarly implications of layered digital abstraction, complex dynamic networks, and scholarly rigor as they are applied to innovative digital publication. By all accounts, the method worked quite well. Many thanks to Florian for all of his hard work! 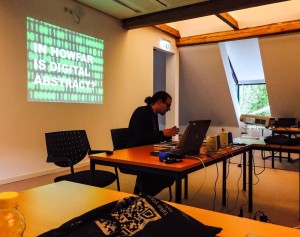