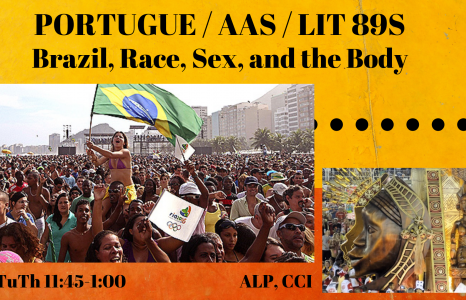 Brazil is commonly understood as an example of a “racially democratic” nation, but as scholars have recently shown, racism permeates all aspects of Brazilian society. This course examines the development of the theorization of race, racial identity and race relations in contemporary Brazil, and will explore very closely the role of sex, and sexuality in the construction of race relations. We will attend to questions such as: how is desire racialized? How is racial difference produced through sex as a material practice and what is the function of sex in racial (self)formation? How do we reconcile questions of pleasure and desire and the structures of power and national identity? The approach of the course will be interdisciplinary, drawing upon works from literature, music, film, anthropology and history. Topics will include colonialism and enslavement, abolition, nationalism, social activism, and popular culture. We will also consider how Brazilian social relations differ from or conform to other racialized patterns in other nation-states in the Americas. Particular attention will be placed on the impact of the interrelationship between race, gender, class, and nation on the lives of black Brazilians. Conducted in English. ALP, CCI