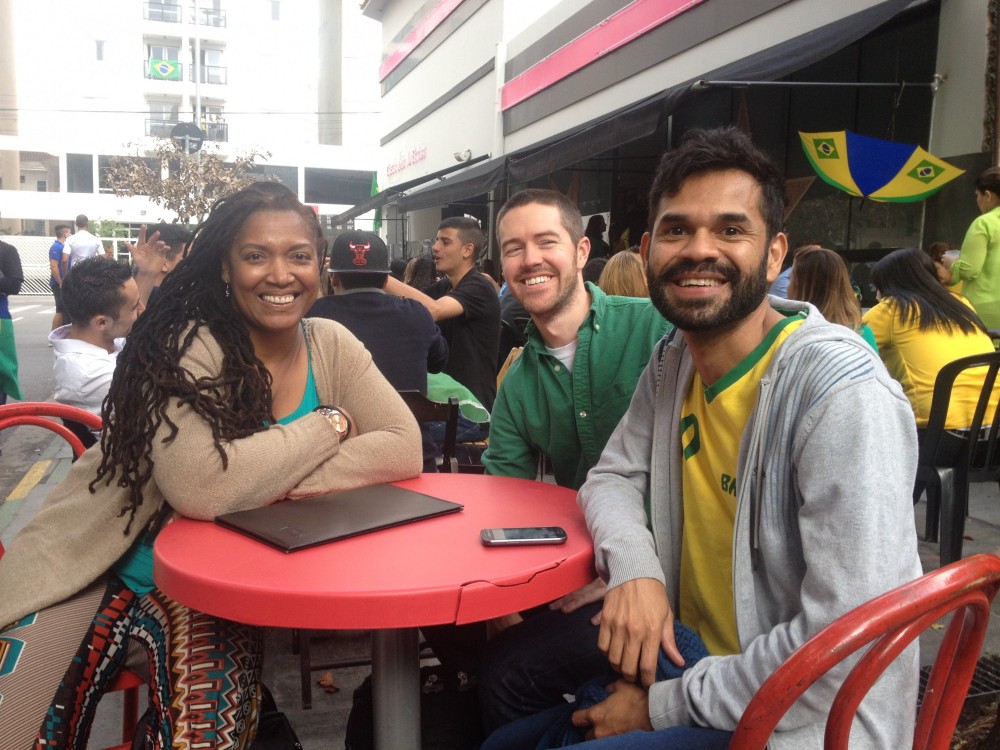 Ava LaVonne Vinesett​, Director of Undergraduate Studies & Associate Professor of the Practice of Dance and Faculty Director of the Baldwin Scholars Program, writes about being in Brazil not for the World Cup.

It’s Friday, June 20th. Due to severe weather my flight from Raleigh-Durham to Miami was delayed, and as a result I’m standing in line with about twenty other impatient passengers—it’s now midnight in Miami and we’ve all missed our connecting flights to Brazil. There are two agents at the counter handling the rebooking process and after about the third or fourth person makes their way to the counter, I start calculating—“each passenger averages about ten minutes with the agent, but only IF the passenger provides a “yes” or “no” response…hmm…okay so I’m looking at about another 40 minutes before it’s my turn.” Then I notice the man who is three people ahead of me—when I began my time calculations his body posture blocked the 10 passports he was holding in his left hand!

I process my current reality and decide to just go with it; what else can I do other than wait? But then I hear “…but what about my ticket to the match? What do you mean the airline’s not going to reimburse me?” I hear the agent make a comment about “an act of God…under these circumstances the airline is not responsible…” Someone turns to me practically in tears and asks if it’s true. A few feet away another passenger catches my eye and proceeds to inform me “You’re not going to be reimbursed for your tickets to the match.” I say how it’s not a problem because I’m not travelling for the Copa.

“No, no it’s not that I don’t like it, I’m just not going to Brazil for that reason.”

“Well no, I’ll be in classes all day Monday and I don’t finish until around 6:30 in the evening.”

People in line begin to laugh.

I smiled politely, but I didn’t get it…until Monday.
I was headed to São Paulo for two reasons, and neither reason included futebol. Depending on the day, my Portuguese intensive course ran from 9:00 am to 4:00 or 6:00 pm Monday-Friday. Concurrently, I was meeting with Santo Daime practitioners(Daimistas) to research how dance integrates with the ayahuasca sacrament during Santo Daime religious “trabalhos,”or “works”.

Ayahuasca is a brew used by forest dwellers of the Amazon for divinatory and therapeutic purposes. It is sometimes referred to as a medicine for its role in identifying, treating, and preventing ailments. The roots of Santo Daime predate its 1930s founding by Raimundo Irineu Serra, or Mestre Irineu, and can include Caboclo and African healing practices, Catholicism, and various forms of Espiritismo. Mestre Irineu promoted a doctrine based on several values among them, love, truth, harmony, strength, and justice. I first learned of the practice during the Duke Dance Program’s 2013 Across The Threshold: Creativity, Being & Healing conference. Bruno Costa was one of our five invited Brazilian guest presenters, and during one of several bate-papos I was interested in his thoughts on the subject of dance and healing. We chatted it up and Bruno extended the “…if you decide to go to São Paulo, let’s get together” invitation, BUT originally I was supposed to travel to Brazil during the summer of 2013—2014 was never part of the plan.

It’s very early Sunday morning, June 22nd, and I’ve finally arrived at my apartment—located in Consolação, my apartment is on the 17th floor of an extended stay hotel. A very large restaurant with a television screen that takes up half of one wall is situated right off the lobby. I pick up my keys from the front desk and am asked if I’ll be joining them for dinner on Monday to watch the game. I go through my explanation about class and how I won’t be back in time…they look at me slightly confused and chuckle a bit…I smile politely, thank them for their help and say “Boa noite”.

Monday, June 23rd. My school is located in the Jardins neighborhood on Rua Alameda Lorena. Google maps say it’s a 32-minute walk from my apartment. As I walk I notice bright yellow, green, and blue everywhere! T-shirts, shoes, hats, skirts, jackets, scarves—from elders to the very young—even those little white dogs I see everywhere I go in Brazil, even they were dressed in Brazil’s colors! My eyes dart from one person to the next as these colors rush towards me. I navigate the heavily congested Avenida Paulista (São Paulo’s financial center), cross over to Pamplona, and I arrive at the school fifty-three minutes later. My instructor explains that the morning session will go until 1:00 pm, and then we break for lunch. However, instead of returning for the afternoon session, everyone is dismissed for the day. Wait…what? “Claro, hoje Brasil joga, não têm aulas.”

Okay, that works! Because I arrived so late and didn’t have a chance to buy groceries or anything else I needed for the apartment, I’m thinking “É perfeito!” Now I can get my shopping done! I map out directions to the store and start my trek. When I arrive, the store is packed and everyone is moving quickly; I chalk it up to life in a big city. After all, what else would you expect from a metropolis that exceeds 20 million people?

I have my dictionary out and am carefully reading every label and looking up words as I go along. After an hour or so, I nonchalantly walk towards the check out. A couple of people briskly push past me to get ahead in the line. Someone asks if I’m having people over for the game. I say no, and explain how I recently arrived and have no food at my place. With a VERY full cart I begin to unload my items. The cashier looks at me and then at the other people in her line and shakes her head disapprovingly. I look over and see that customers at the other register are packing their own groceries. The cashier tells me to place my items in the bags provided, but the bags won’t separate. In the time it takes me to separate one bag, she’s already packed three. People arriving in line after me are shifting from side to side and sighing heavily. I hear bits and pieces of conversations about tonight’s game, and across the street a mix of noisemakers, and people laughing and singing spill out of the bar and onto the street. Tables and chairs are now being set up in a way that bridges the sidewalk and the street. But then it happens…I pull out my card to pay for the items and everyone in the line exclaims “Nao, dinheiro, dinheiro! Não temos tempo para isso!” I was in the line to pay with cash. The other line was for “cartão”.

I apologize profusely, both in English and Portuguese. By the time my check out is complete, I’m just about the only customer left in the store and they begin to pull the gates and shut down the lights. I hail a taxi and shove my grocery bags into the car. As I give the driver my address, I see he has a mini-television mounted on the dash and it’s apparent the game has started.

It’s Tuesday, July 8th and Brasil is playing Germany. My instructor, Edmilson Rufino asks several of us if we’re interested in accompanying him to watch tonight’s game. In spite of my lack of interest in the “game” what I hear is “field trip” and I’m one of the first to say yes! Who wouldn’t choose a fieldtrip over sitting in a room? Immediately following the morning session we walk to Avenida Paulista and enter the metro. It’s stifling! There are so many people you can only move at a snail’s pace. Being back at the school is starting to sound more appealing. We start out as a group of seven or eight, but a few folks were overwhelmed and just couldn’t handle it. They bailed. We take three trains to get to Ed’s neighborhood in Santa Cecilia, and by the time we arrive there are four of us. People head to their favorite bars about 3-4 hours before the start of a game. By the time we arrive the area is already filled with the sound of horns and whistles and spectators dancing and singing. We find a spot, Ed asks the waiter to set up a table for us on the sidewalk, and we prepare for the match to start.

After the anthem, as I’m watching the game we’re discussing Thiago Silva’s suspension, Neymar’s fractured vertebra, and the talents of Júlio César, Hulk, and David Luiz and others. Time passes with laughter and cheer, and then the tragedy begins to unfold…in about 30 minutes Germany scores 5 goals. I sit stunned, and unable to process what I’m seeing. My stomach is in knots and I’m confused, people around me are starting to openly weep…as in falling to their knees and crying.

People are consoling one another, physically holding each other up, and genuinely mourning the loss of this match. Ed suggests it’s best that we head out before the match ends. We leave Ed and pour into a taxi to head home. As we pause at lights, drivers talk across cars to one another and speak of the “decepção”.

I am so moved by what is happening around me—to me.

I attempted to pick and choose aspects of a culture that fit my agenda instead of just taking everything in and experiencing life as it happens. Historical moments occur outside of fit agendas, plans, or expectations. The World Cup is such a force in Brazil. Its presence permeates every aspect of life; it dominates conversations, schedules, and at times, it even dominates emotions. Although I did not go to Brazil for the World Cup, in the actions of a nation I was afforded a unique opportunity to see some of the values Mestre Irineu highlighted in the Santo Daime teachings. I now share a memory of love, compassion, and strength with millions of Brazilians—a memory that is woven into the fabric of a national identity. I can recall the sounds, smells, and my feelings of being in Brazil during the 2014 Copa do Mundo.

Director of Undergraduate Studies & Associate Professor of the Practice of Dance

Leave a Reply to Kolkata Girls