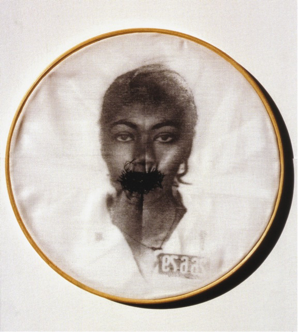 The Global Brazil Lab at the Franklin Humanities Institute at Duke University is organizing two events in the Spring semester of 2015 that highlight the connections between art and material culture in Brazil and Africa.

Roberto Conduru has an interdisciplinary approach to Art History, building on visual anthropology, architecture, and religion in order to examine how modernity was built in Brazil. He has published on several artists and architects, including Willys de Castro, Abraham Palatnik, Lucio Costa, and Oscar Niemeyer, and recently on Afro-Brazilian artistic and cultural connections.

Rosana Paulino’s art foregrounds the position of black people, especially black women, in Brazilian society. Paulino stated: “As a black woman myself, I question my role within a society that has suffered through slavery. My intention is to investigate the marks that slavery planted on the black female body and soul, and on Brazilian society.”

Gabriela Salgado will present her ongoing exchange project Transatlantic Connections, which investigates the historical precedents and potentialities of the interaction between Africa and Latin America in the visual arts, and highlights the foundational dialogues that originated in the encounter between millions of Africans, Amerindians, and Europeans in the Americas.