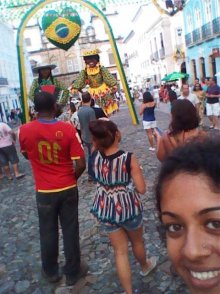 Janani Arangan is a Senior from Laguna Niguel, CA currently studying Environmental Sciences and Portuguese. She began taking Portuguese classes with Professor Magda Silva her second year due to her interest in the Amazon rainforest. “After studying abroad there with Duke in Brazil (summer 2013), I became more interested in other parts of the country, some of the cultural practices, and its colonial history that make Brazil quite unique in Latin America,” Arangan said.

After taking Spanish in High School, Arangan “wanted to try something new in college.” She first took three semesters of Haitian Creole, a French-based language spoken in Haiti. However, given her passion for Latin America, Arangan enrolled in Portuguese 112 (Advanced Introductory Portuguese) to further her exposure to Romance languages.

Upon completing her third semester of Portuguese at Duke, Arangan carried out a DukeEngage project during the summer of 2014 in Rio de Janeiro. “I worked with a children’s health NGO in Rio de Janeiro and observed the harsh realities of social exclusion in that region,” Arangan said. “I also had the opportunity to reside in a pacified favela and train capoeira with a local group, thus deepening my community involvement,” she added. To strengthen her understanding of Brazil as a whole, Arangan is currently taking classes focused on race, colonialism and culture in Brazil. Arangan feels that by taking these courses, she has had the chance to deconstruct and reflect upon many of her experiences from last summer and renew her commitment to work in Brazil.

As a Senior at Duke, Arangan has taken advantage of many Brazil-related opportunities. “There are many opportunities for a wide variety of fields in Brazil and other Lusophone countries,” she stated. “The Portuguese department is growing—I only wish I was younger! From study abroad options to DukeEngage funding to Duke-Brazil Initiative grants, students have options to get involved and travel. And like me, you might begin studying Portuguese thinking you’re interested in one thing, and learn there are a multitude of other areas in this region worth exploring,” she concluded.

As a fun fact about her Brazil studies at Duke, Arangan suggested to students interested in Brazil to, “Take capoeira with Dr. Katya Wesolowski, also known as Camarão! You’ll not only learn to sing in Portuguese but also learn how to do backflips!”