For Duke Scholar, South American Dam is a Window into Politics, Energy and Economics 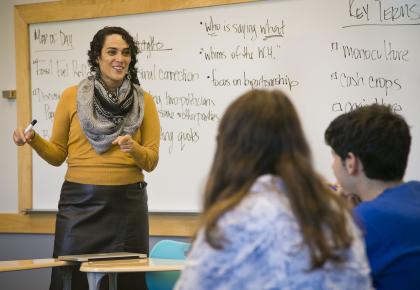 Christine Folch, a cultural anthropologist, has studied how a South American dam project bridging Paraguay and Brazil has affected cross-nation relations and the environment.  Photo by Duke Photography

As a graduate student in anthropology, Christine Folch headed to Paraguay to study that nation’s relationships with neighbors Brazil and Argentina. She expected an education in cross-border law and trade.

Right country, wrong topic, as it turned out. As she immersed herself in the culture and began talking to people, her attention kept being diverted.

“They kept pointing me to their water,” recalled Folch, a new professor in Duke’s cultural anthropology department.

Specifically, Paraguayans urged Folch to examine Itaipú Binational Hydroelectric Dam, the massive dam on the border of Paraguay and Brazil. Itaipú – pronounced E-Tie-Poo – is a massive deal in South America, a rare place on earth that has embraced hydroelectric power rather than the burning of fossil fuels as its primary energy source. The dam produces enough power to fuel all of Paraguay and drives the industrial engines of Rio de Janeiro and Sao Paolo as well. Paraguayans steered Folch to it knowing there were valuable lessons to be learned.

So she checked it out – briefly, at first – and then again for an 18-month stint embedded in the dam’s administrative offices. The work fueled Folch’s interest in environment and sustainability issues and is the basis for her first book, which is now in the review process. Hired at Duke under a new ‘environmental humanities’ umbrella, Folch will teach courses on energy and environmental sustainability issues and is one of three co-directors of the Global Brazil Lab, where she hopes to bring her deep understanding of South American culture and in the inner workings of Itaipu, which may offer lessons on how one part of the world successfully powers itself without a reliance on fossil fuels.

Folch, an assistant professor, is the first not-yet-tenured professor to serve as a co-director of a humanities lab.

“Professor Folch is a remarkably dynamic scholar who will reach large communities with her research and teaching, both in Latin America and here at the Franklin Humanities institute, Cultural Anthropology, the Energy Initiative and other constituencies,” said FHI Director Deborah Jenson. The Global Brazil Lab falls within the FHI umbrella.

The daughter of a Cuban mother and Dominican father, Folch grew up in a Spanish-speaking household, moving often as her father, a member of the U.S. Army, hopped from one post to the next. (Her move to Durham this summer was a homecoming of sorts; she learned to speak English at age 5 when living near Fort Bragg in Fayetteville.)

Folch studied history at Harvard before heading to the City University of New York’s Graduate Center, where she studied anthropology and wrangled a series of grants to live for 18 months in and around Itaipu.

She comes to Duke from Wheaton College in Illinois, where she taught for three years.

The dam was a long-term project of the governments of Paraguay and Brazil, each of which had already adopted hydroelectricity as the primary means of power production. Construction began in 1974. It took a decade before the first bit of energy was produced and nearly another decade before construction was complete.

Given the dam’s location – – between the smallish Paraguay and the massive, growing Brazil, Folch knew she had a rare window into the mechanics of energy, politics and economics.

Itaipú is the world’s second largest hydroelectric dam, producing enough electricity to power 30 percent of California – or all of North Carolina, eight times over. When Folch became interested in it, the dam was in damage control mode, a new leadership team taking over after graft allegations had sullied its name.

The new CEO invited Folch to observe the dam’s day-to-day operations, sit in on business meetings and generally have the run of the place. Her workspace was a foyer outside the CEO’s office, where would sip coffee, gab with staffers and see who visited for high-level meetings.

She emerged with insights on what she says are principles of sovereignty and sustainability, two values often in conflict in regards to renewable energy. She hopes to address this idea through courses such as her current offering, “Energy Futures and Environmental Justice,” and speakers and conferences through the Global Brazil Lab.

“Brazil is unusual in its dependence on hydroelectric power, generated both within and across its borders,” said John French, a Duke historian and lab co-director. “So the presence of Professor Folch allows us to address debates regarding transnationalism and globalization by exploring how nations, societies and governments are dynamically intertwined.”