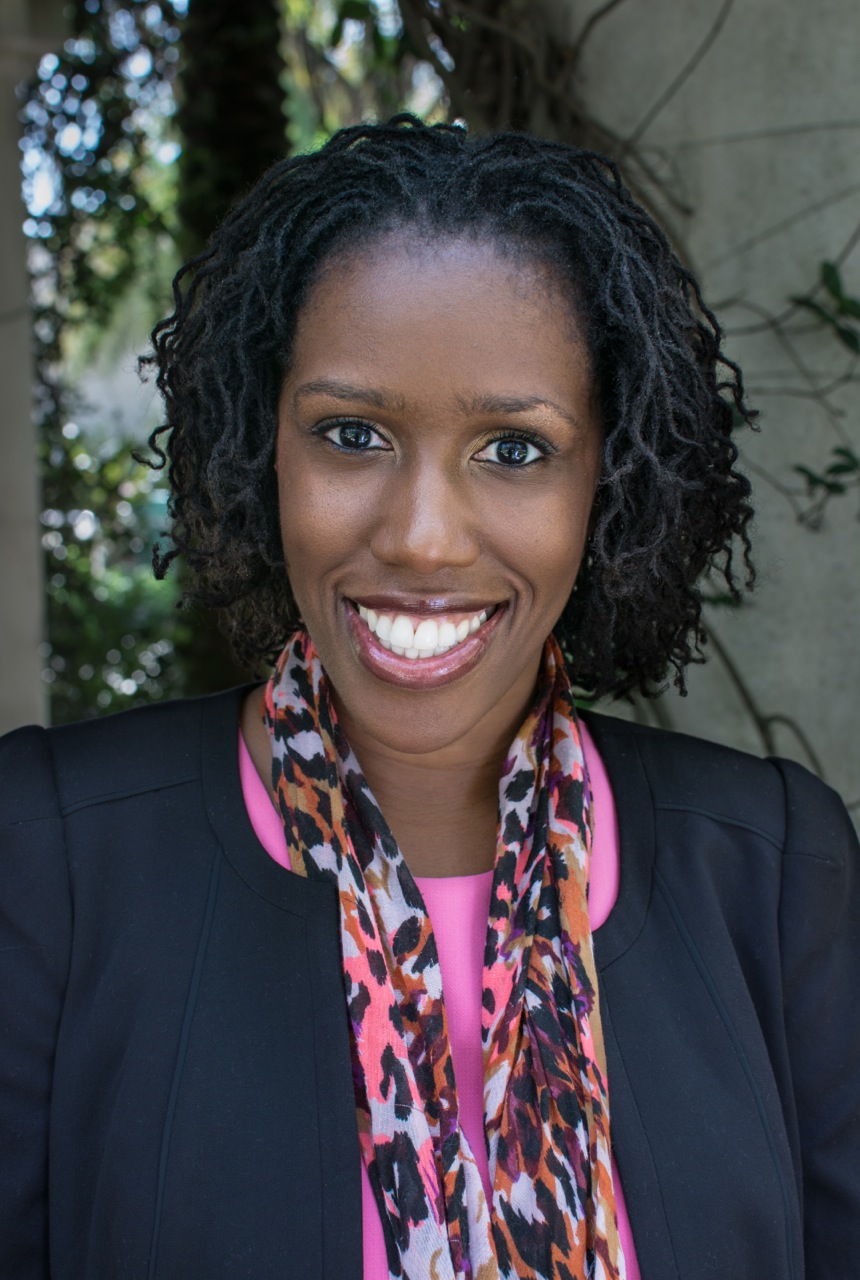 Dr. Elizabeth Hordge-Freeman is Assistant Professor of Sociology with a joint appointment in the Institute for the Study of Latin America and the Caribbean at The University of South Florida, Tampa. She received her B.A. from Cornell University and completed her M.A./Ph.D. in Sociology from Duke University in 2012.  Dr. Hordge-Freeman’s first book, The Color of Love: Racial Features, Stigma, & Socialization in Black Brazilian Families was published in November 2015 with The University of Texas Press.  The Color of Love is under contract with the Federal University of São Carlos for publication in Portuguese.  Her co-edited volume, Race and the Politics of Knowledge Production: Diaspora and Black Transnational Scholarship in the USA and Brazil (with Gladys Mitchell-Walthour), was released in February 2016 with Palgrave MacMillan. She has published in the Journal of Marriage & Family, International Journal of Modern Sociology, Ethnic and Racial Studies, among other academic venues. She is currently on research leave with a McKnight Fellow 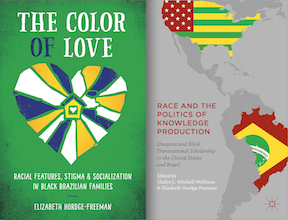 Cover matter for The Cover of Love

ship to complete her third book, Second-Class Daughters: Informal Adoption as Modern Slavery in Brazil, which has been generously funded by a Fulbright U.S. Scholar grant, a Ruth Landes Memorial Fund grant, and the American Sociological Association Fund for the Advancement of the Discipline grant.  In July 2015, Hordge-Freeman’s research to promote racial equality was recognized with a Certificate of Recognition from the State Secretariat for Justice, Human Rights, and Citizenship (SEJUSC) of the state of Amazonas, Brazil. She values global engagement in both her research and teaching and was recently awarded the statewide 2015 Florida Campus Compact Special Award for Global Engagement for collaborating with The Instituto Cultural Steve Biko and Brazil Cultural to launch a global service-learning program in Salvador, Bahia.

Talk: “What is it that Data Do? Ethnographic Paths into Race, Violence, and the Brazilian State” 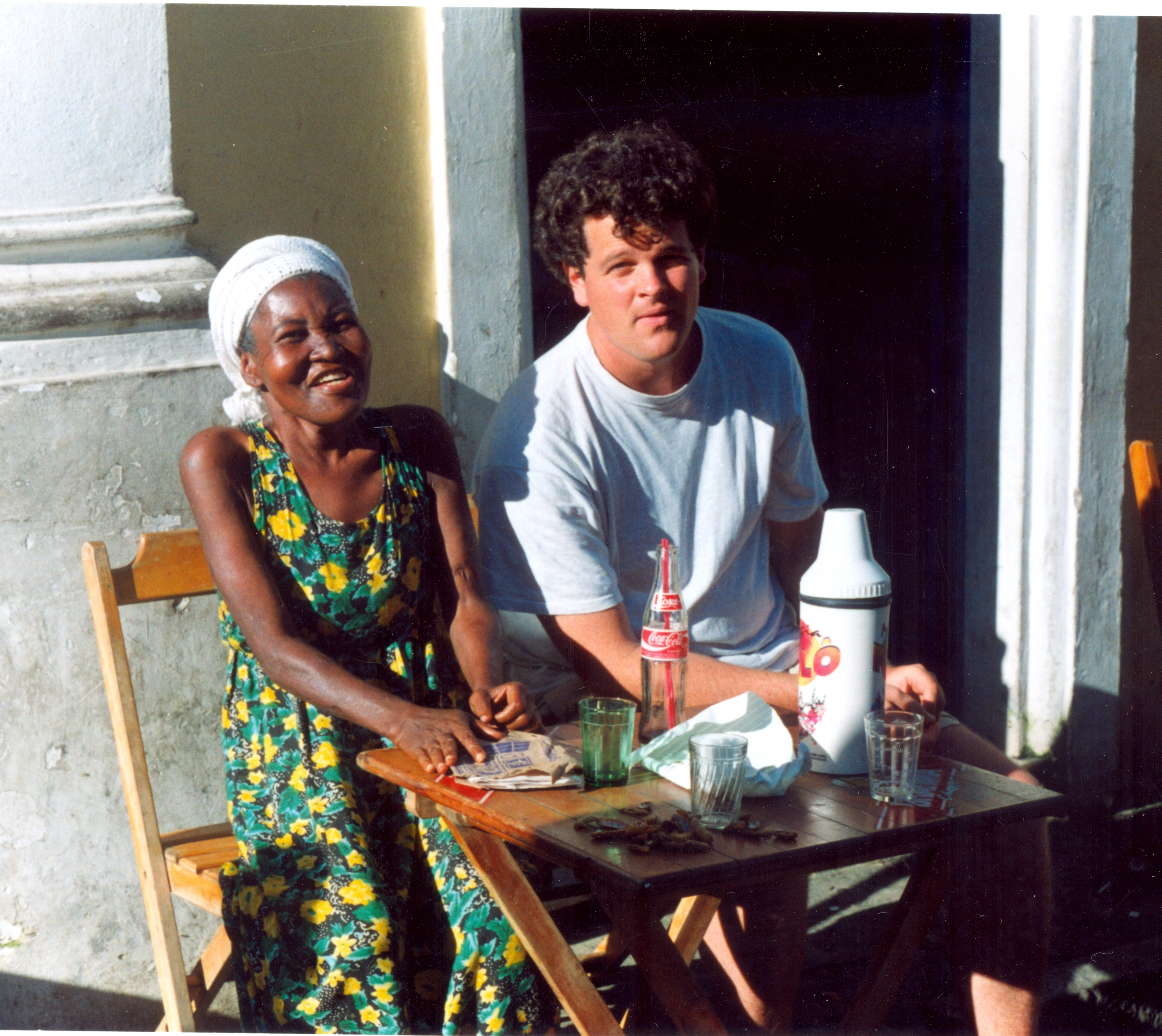 John F. Collins is Associate Professor of Anthropology at the CUNY Graduate Center and Queens College/CUNY, where he is Director of Latin American and Latino Studies.  He specializes in the historical anthropology of Latin America and the Atlantic world.  Since the mid-1990s he has conducted ethnographic research on UNESCO world heritage sites, urban restoration programs, and their relationships to histories and racial politics in Brazil. This gave rise to his first book, Revolt of the Saints: Memory and Redemption in the Twilight of Brazilian Racial Democracy (Duke, 2015). Professor Collins’ newest research project, “Under English Eyes,” examines the ways Africans, intended for Brazilian slave markets but who instead disembarked in the northeastern Brazilian state of Bahia as “free” people due to British efforts to extinguish the slave trade, experienced Brazil’s 19th C. transition to ostensibly free labor. He is also conducting an ethnography of hunters of white-tail deer in New Jersey and his Ethnographies of U.S. Empire, co-edited with Carole McGranahan of the University of Colorado, is forthcoming from Duke University Press. Professor Collins is the Co-Chair of the Columbia University Brazil Seminar and a board member of the Society for Cultural Anthropology and the Journal of Latin American and Caribbean Anthropology. He holds a doctorate in Cultural Anthropology from the University of Michigan as well as a B.A. in Comparative Literature from Yale College.

Dr. Pan has been working in the Amazon since 1999 on studies ranging from land use, population 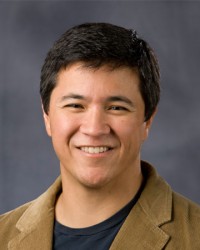 growth, and human fertility to malaria, dengue, enteric disease and malnutrition. His background is in biostatistics with additional expertise in remote sensing, spatial analysis, mathematical demography, longitudinal models, and environmental health. Pan was recently recognized with the James E. Grizzle Distinguished Alumni Award at UNC-Chapel Hill for significant contributions to public health and biostatistics. Dr. Pan is strongly committed to enhancing the statistical quality of research conducted in low and middle-income countries (LMICs) where there is an abundance of data, but a shortage of statistical expertise. He helped lead the Iquitos Tropical Disease Laboratory, which houses students involved in global health research from Duke, Johns Hopkins, and Tulane Universities. Pan’s primary area of research focuses on the interface between human activities and the environment, with particular interest in demographic, health, and environmental outcomes resulting from these interactions.

Dr. Pan is currently the PI or co-PI of six studies related to research in the Amazon Basin: (1) an NICHD study of household level demographic and economic change, land use, anopheles density and malaria risk in the Peruvian Amazon (HD055415); (2) a NASA study to test the feasibility of the development of an early warning system for malaria in the Amazon; (3) a Population Institute study of household vulnerability and migration and the transition from infectious to chronic disease risk burden along the

Interoceanic Highway in Madre de Dios (Peru) and Acre (Brazil); (4) a DGHI-Pratt pilot study to evaluate the impact of heavy metal and infectious disease exposure among indigenous and non-indigenous communities along the Madre de Dios watershed; (5) a conference grant from the Africa Initiatives Program at Duke to improve collaborations among researchers, NGOs and donors dedicated to Population-Health-Environment Integrated approaches; and (6) a recently awarded grant from the Inter-American Institute for Global Change Research (IAI) to develop infectious disease risk scenarios for the western Amazon basin (Ecuador, Peru and Brazil) as a function of socio-ecological vulnerability.

Most relevant to the Duke Brazil Initiative are Pan’s collaborations with CEDEPLAR at Universidade Federal do Minas Gerais in Belo Horizonte where he has had long-term collaborations with Dr. Alisson Barbieri on studies of land use, population and health (most recently the IAI project) and prior collaborations working on tuberculosis with Professora Ethel Leonor Noia Maciel in Universidade Federal do Espirito Santo, Dras. Betina Durovni, Solange Cavalcante, and Valeria Saraceni of the Municipal Health Secretariat of Rio de Janeiro, and Dr. Antonio Pacheco of the Fundacao Oswaldo Cruz. In the upcoming year, Pan has four specific collaborations with Brazilian colleagues: (1) the new IAI grant will involve intellectual and research exchanges between Duke and UFMG to better understand the evolution of infectious and chronic diseases in the western Amazon basin; (2) Dr. Alisson Barbieri plans on submitting an application to have a year-long sabbatical here at Duke, likely during the 2014-2015 academic year; (3) Dr. Barbieri and Dr. Pan will be exploring the use of telecom and other web technology to hold intellectual exchanges between Duke and UFMG; and (4) Pan will be assisting Dr. Maciel in analyzing the most recent tuberculosis data in the city of Vitoria.

Most recently, Dr. Pan has received a three-year $1 million grant from NASA for research in the Peruvian Amazon. 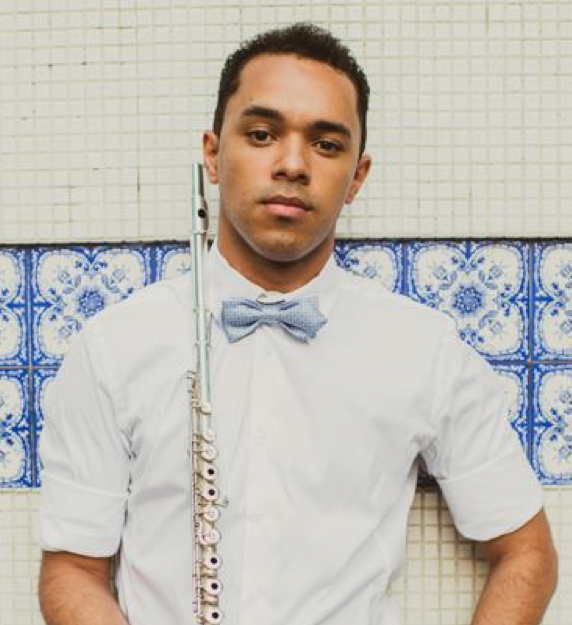 Flutist Guilherme Andreas began his musical journey in the wind ensemble at a church in Brazil. He started his Bachelor of Music in Flute Performance at the age of 16 working with Dr. Beatriz Magalhães Castro, in the University of Brasilia. Even without finishing his Bachelor’s, he auditioned for a flute position with the Brazilian Marine Wind Symphony in Rio de Janeiro where he eventually held the principal flute position of this distinguished ensemble for 4 years. Once in Rio, Andreas finished his Bachelor’s studying with the French- Brazilian Professor Odette Ernest Dias in the Brazilian Music Conservatory, where he also earned a diploma in Chamber Music under the direction of the principal cellist with Brazilian Symphony, Sr. David Chew. Andreas also studied with Claudia Ribeiro do Nascimento (São Paulo Symphony) and Michel Bellavance (Music Conservatory of Geneva).

A versatile musician, he is equally at home as soloist and chamber musician. Known for his powerful sound and inspired phrasing, Andreas toured as a soloist with the Marine band in several concerts in many theaters all over Brazil. He simultaneously performed recitals with the Gaubert Trio – Guilherme Andreas, flute; Maria Luisa Lundberg, piano; and Luiz Sales, cello; presenting insightful, and heartfelt interpretations of the rich repertoire for this combination of instruments. Andreas also performed as the substitute 3rd Flute/Piccolo with Brazilian Symphony Orchestra. A captivating performer, young composers from Rio de Janeiro selected Andreas to premier numerous pieces written for solo flute.

Andreas’ refined technique, interpretation and engaging stage presence have earned first prize in many national competitions in Brazil including the São Paulo Symphony Masterclass Competition (performing for Emmanuel Pahud), the 1st Prize in the Young Soloists Competition of the Eleazar de Carvalho Music Festival and the Eduardo Tagliatti Prize for the Best Music Interpretation of the Prokofieff Flute Sonata in the Eduardo Tagliatti Chamber Music Competition. In 2014 Andreas won the Musica no Museu National Competition that awarded him a scholarship to pursuit a Master’s in Flute Performance at James Madison University in America. Once in the States, he performed the Reinecke Flute Concerto with the JMU Symphony as one of just two winners of the JMU Concerto Competition. In spring of 2015, he also won the Washington Flute Society Masterclass Competition, playing for Ms. Leone Buyse. Upon graduating with his Master’s degree in flute performance from JMU, Andreas hopes to continue his intensive study of the flute to launch a career as an orchestral musician and soloist. 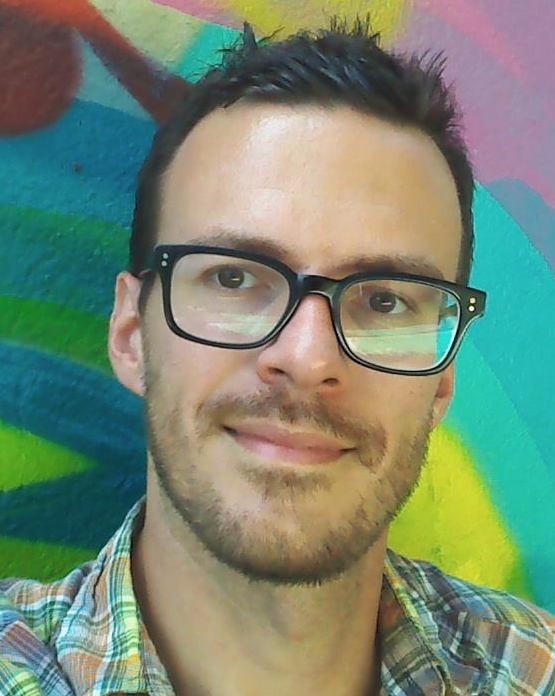 Georgia. His research focuses on Brazilian politics during the 1964-1985 military dictatorship, particularly the changes that took place in the civilian “political class” as it was confronted with the dual challenges of military tutelage and unprecedented popular mobilization. He is currently completing his first book, tentatively titled Inadvertent Opposition: Politicians, Social Movements, and the Demise of Brazil’s Military Regime. He has also conducted research on race and sexuality and is completing a book chapter on representations of blackness in Brazil’s most important soft-core gay magazine, as well as an ethnographic article on how gay Brazilian tourists in the US and Europe construct a sexualized of themselves through their sexual and romantic encounters with foreign men (co-authored with Alvaro Jarrin, College of the Holy Cross). His research has been supported by a variety of grants, including a Fulbright-Hays fellowship from the Department of Education and a Fulbright Scholars Postdoctoral Award from the Department of State. In the Global Brazil Lab, Dr. Pitts is co-directing with Marcelo Noah (Romance Studies, Duke University) the project “All Eyes on Congress: Sound and Fury in Brazilian Politics,” which is using audio recordings of sessions of the lower house of Brazil’s Congress to explore how our narratives about politics change when we can hear the actual words spoken and not simply read a transcript. He received a B.A. from Oral Roberts University in 2001, an M.A. in Latin American Studies from Vanderbilt University in 2006, and a Ph.D. in Latin American History from Duke University in 2013.