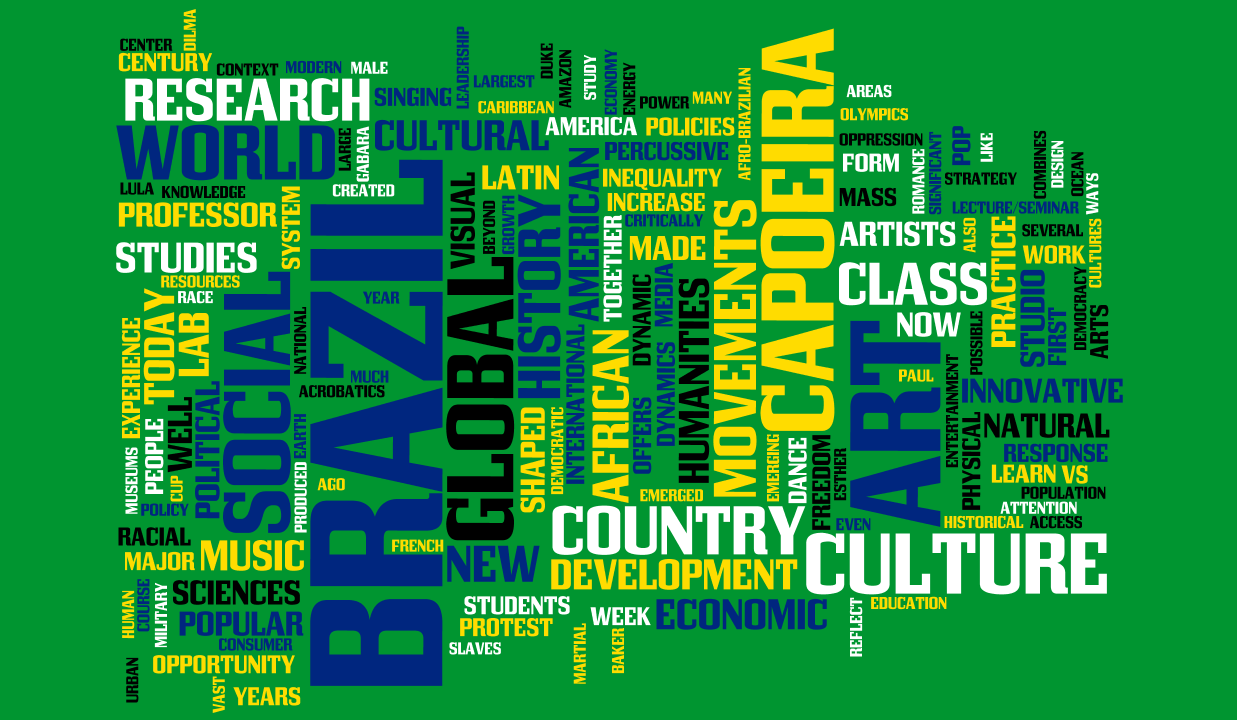 The Franklin Humanities Institute is delighted to announce the launching of a new Humanities Laboratory, GLOBAL BRAZIL: CULTURE, NATURE, POLITICS, in Fall 2014.  Global Brazil aims to generate new conversations between the humanities, the social sciences, and the sciences by including students in research focused on Brazilian arts, social movements, and natural environment. The Lab will be directed by an interdisciplinary team of faculty: Paul Baker, Earth and Ocean Sciences; John French, History and African and African American Studies; and Esther Gabara, Romance Studies and Art, Art History & Visual Studies. The FHI Labs are made possible by the generous support of the campus-wide Mellon Humanities Writ Large grant.

Why a Humanities Lab on Brazil now? The largest country in Latin America and the fifth largest in the world, Brazil has emerged as a leading 21st century state by virtue of the vibrancy of its culture, the development of its economy, the richness of its natural resources and, foremost, the democratic energies of its people. The past decade has seen a vast increase in Brazil’s international prominence and leadership stemming from its uniquely dynamic social movements. A country featuring massive urban centers with major universities, museums, and research institutions, as well as the world’s greatest trove of biodiversity, Brazil offers both challenges and solutions relevant globally: regarding the preservation of languages, natural environments, and cultures threatened by uncontrolled “development.” Indeed, the cultural, spiritual, and musical life of Brazil has been profoundly shaped by the half of its population that is of African descent, as well as its diverse indigenous peoples and cultures. Through spirituality, dance, martial arts, and visual culture, these groups have contributed to the veritable phenomenon the country represents in today’s world, and offer others ways of knowing and living in the face of these challenges. As host to the 2014 World Cup and the 2016 Summer Olympics, Brazil will feature even more prominently on the global stage. The Global Brazil Lab offers students and faculty from across Duke a unique opportunity to participate in collaborative and independent research with visiting Brazilian scholars, artists, and activists, and contribute to our understanding of and engagement with this fascinating country.

The Lab’s featured courses in Fall 2014 will include “Global Brazil” and “Capoeira: Culture and Practice.” Students will also have the opportunity to participate in faculty-led research projects focused on art and popular culture (with the goal of planning a public exhibit on Pop Art in Brazil and the Americas); biodiversity, energy, and human development in the Amazon; and political inequalities and democratic social movements.

The Global Brazil Lab will be closely aligned with the new Brazilian and Global Portuguese Major in the Department of Romance Studies, with the Duke Brazil Initiative, and with the Center for Latin American and Caribbean Studies.

What is a Humanities Lab?

The core commitment of the Humanities Labs is to engage undergraduates in advanced research alongside faculty and graduate student mentors/collaborators. Organized around a central theme, each Lab brings together faculty and students from the humanities and other disciplines in interdisciplinary, “vertically integrated” research projects. Lab participants work in physical spaces at the Franklin Humanities Institute that are designed to foster both formal collaboration and informal exchange. Shared technological resources enable the Labs to experiment with new research methods, new lines of inquiry, and new ways of engaging with public audiences at Duke and beyond.