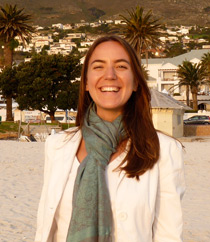 Born in Paris, Aude Dieudé received her Master in 2010 and is currently completing her PhD in French and Francophone studies at Duke University, where she will also receive a Certificate in African and African American Studies. Prior to coming to the United States, she was awarded a Maîtrise in English and Anglophone Studies from the University Paul Valéry located in Montpellier, France. In addition, Aude spent two years studying and teaching at Mount Holyoke College, and one academic year at the Ecole Normale Supérieure to conduct research in Paris. Her dissertation explores the themes of race and resistance in nineteenth-century Haitian writings and highlights their impact on French-speaking nineteenth- and twentieth-century African and Caribbean literature. Aude Dieudé has published a book review in Etudes Littéraires Africaines on “Haiti Rising: Haitian History, Culture and the Earthquake of 2010”, and a digital article on “The Pedagogy of Collaboration in the Digital Age”. Aude has also been the recipient of several distinctions at Duke University including the Julian Price, John T. Grigsby and Alice Blackmore Hicks fellowships, and has also received conference and dissertation travel grants from the Graduate School, the Romance Studies and Women’s Studies departments as well as the Center for Latin American and Caribbean Studies and the Franklin Humanities Institute Thanks to this generous support, she has been able to present her work internationally at York University and the University of Toronto in Canada, the Ecole Normale Supérieure and the Sorbonne Nouvelle in Paris, as well as Duke, Emory, and the Unversity of North Carolina in Chapel Hill in the United States. Because she enjoys conducting research collaboratively and with broad applications, she has co-organized and participated in two seminars with writers at the Ecole Normale Supérieure in Paris, and in conferences and talks with scholars and directors of nonprofit organizations with the Haiti Laboratory at Duke University. Aude Dieudé has also taken part in additional international conferences, programs and workshops including the Johannesburg Workshop in Theory and Criticism in South Africa in 2009. During the summer of 2013, she will join the Duke University Program in Global Policy and Governance, with a focus in humanitarian action while working with one of the UN organizations based in Geneva, Switzerland. For more information, please visit her portfolio and website: https://sites.duke.edu/aude/sample-page/