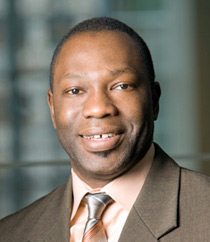 Guy-Uriel Charles is a Professor of Law at Duke and the founding director of the Duke Law Center on Law, Race and Politics. He teaches and writes on issues related to constitutional law, election law, campaign finance, redistricting, politics, and race. He joined Duke Law’s faculty in 2009.

Professor Charles is co-founder of the Colored Demos blog, www.coloreddemos.blogspot.com/, and a reviewer for Stanford University Press, University of Chicago Press, and NYU Press. He has published articles in Constitutional Commentary, The Michigan Law Review, The Michigan Journal of Race and Law, The Georgetown Law Journal, The Journal of Politics, The California Law Review, The North Carolina Law Review, and others. His is co-author, with James A. Gardner, of Election Law in the American Political System (Aspen, 2012; with James A. Gardner) and co-editor of Race, Reform, and Regulation of the Electoral Process: Recurring Puzzles in American Democracy (Cambridge University Press, 2011; with Heather K. Gerken & Michael S. Kang).