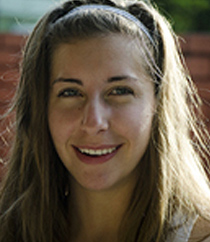 My involvement with the Haiti Lab began after spending summer 2010 in Léogâne,
Haiti, with Family Health Ministries through DukeEngage. While in Haiti, my student
research team conducted 101 qualitative interviews and SPRINT-E surveys (a
diagnostic tool for PTSD) in Léogâne’s tent cities. The interview questions, compiled
by the Haiti Lab, asked for interviewees’ earthquake narratives and covered such
other topics as the role religion, music, and other activities play in coping with
stress and trauma.

That following fall, I began an independent study through the Haiti Lab, in
association with the Discourses of Trauma team. I worked with two other students
on developing a digital map of American universities conducting mental health
research in Haiti, with the goal of connecting various mental health researchers and
their work. I continued to work on the map the following semester and presented
our work at Franklin Humanities Center’s Wednesdays at the Center with other
Haiti Lab panelists.

This past summer, I worked as the Haiti-Rwanda Commission (HRC) intern at
Partners in Health, an international health care NGO co-founded by Dr. Paul Farmer.
I oversaw the HRC’s website development and assisted with program development
tied to the HRC’s Education and Leadership Program and Women and Girls
Initiative. Throughout the summer, I connected with PIH’s Mental Health Team and
engaged with them in conversations about my past project. I am currently working
as a Mental Health Fellow with the team.

For the first two months of the semester, I have been compiling and organizing
materials for a physician curriculum the MH Team is developing for Haitian
physicians at Zanmi Lasante (PIH’s sister organization in Haiti) clinics throughout
Haiti. The goal of this curriculum is to train primary physicians in baseline mental
health care and treatment. It is one of several curricula the MH Team is developing
under a Grand Challenges Canada grant; one of the others is a curriculum for ZL
Community Health Workers (CHWs) who visit patients in their communities. These
curricula are aimed at decentralizing mental health service delivery in Haiti. Their
impact will be used to inform mental health policy at the national level.

Currently, I am beginning to oversee a new project for the MH Team focused on
child mortality, malnutrition, and mental health. I will be conducting an extensive
literature review to figure out the connections among child death, malnutrition, and
mental health with the goal of outlining empirical cause-and-effect relationships. I
will be exploring such general topics as depression in mothers and its effect on child
nutritional status, as well as poverty and its effect on nutritional status. From there,
I will be developing an intervention proposal, which will ultimately be presented to
PIH’s Chief Medical Officer. I will be launching this project in the next two weeks.