Unveiling the Haitian Declaration of Independence 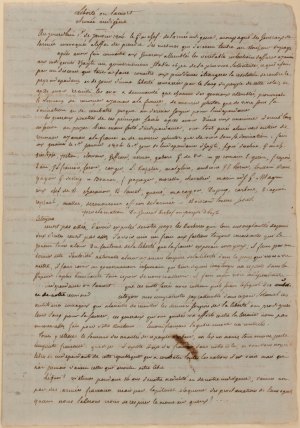 The first page of the manuscript copy of the Haitian Declaration of Independence now at the Rubenstein Library.

On January 24, the Haiti Lab celebrated the Rubenstein Library’s acquisition of a historic manuscript copy of the Haitian Declaration of Independence. This rare document was recently found in France among the papers papers of Jean Baptiste Pierre Aime Colheux de Longpré, a French colonizer of Saint-Domingue (Haiti) who fled the country during its revolution and settled in New Orleans. The copy was very likely made shortly after the Declaration took effect on 1 January, 1804. It is one of only a few contemporary or near-contemporary manuscript copies known to scholars, joining copies at the British Library, the French National Archives, and the National Library of Jamaica. Read more about the document on the Duke Library blog.

In honor of this important find, the Haiti Lab (along with Duke Libraries, CLACS, and the Forum for Scholars and Publics) held an evening of events that included a roundtable discussion with Richard Rabinowitz, Julia Gaffield, Laurent Dubois and Deborah Jenson, the unveiling of the document by Duke archivist Will Hansen, and Jacque Pierre’s reading of his translation of the text into Kreyol. That evening also marked the opening of the CLACS gallery exhibit “Haiti: Sevis Lwa”, a collection of Haitian Vodou flags on loan from the Florida International University’s Patricia and Phillip Frost Museum.

The event was also covered by the Haitian daily Le Nouvelliste, who sent journalist Roberson Alphonse to report on the festivities.