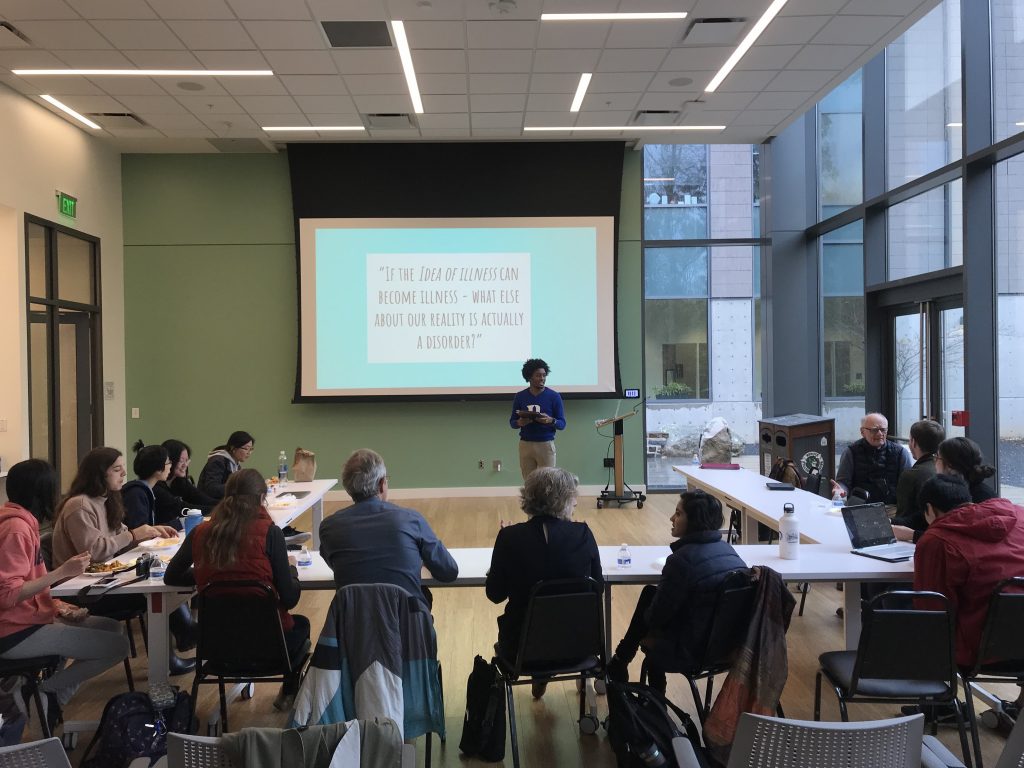 Jonathan Hill-Rorie, Duke alum (T ‘15) and masters student at Harvard T.H. Chan School of Public Health, discussed his practicum research conducted with the Health Humanities Lab@FHI. Over the past few months, Jonathan worked with the HHL to develop several tools for increasing student wellness at Duke. He helped develop the HHL’s monthly Narrative Medicine Mondays workshops for students, during which students read, analyze and reflect on literary texts and media, and engage in creative writing on a specific health topic. Jonathan flew down to host November’s session on adolescent mental health and will hopefully join us again next semester for a workshop. He also developed two pilot surveys related to student wellness and mental health. One of them is currently in circulation, and is aimed at Duke students and recent undergraduates. The other survey is aimed at Duke professors, to learn how they handle students in distress, and has yet to become public. The HHL is extremely grateful for his work!

This interview has been edited and condensed for clarity.

How did you hear of the HHL?
I got involved with the HHL the year after I graduated from Duke, when I was working at Duke Hospital. I wanted to look at comic books and superheroes as a means by which patients could imagine themselves outside of their illness. I talked to Eileen Chow, who I’d worked with at FHI’s Story Lab, and she connected me with Deborah Jenson, the HHL’s founder and co-director. There was talk of doing a project where we’d speak to patients about their illnesses and ask them, “If you could have a superpower what it would be?” We’d then explore why they’d want that superpower and think about how superheroes allow people to reimagine their bodies. While that project never came to fruition, I was eventually able to get involved with the HHL via my research practicum for Harvard.

How did you get involved with the HHL for your research practicum?
In the MPH program at Harvard, you have to do a summer practicum that’s 300 hours of public health-related content. When I got closer to determining my practicum theme, I realized I’d done a lot of work around student mental health and suicidality, developing strategic plans of how universities can prevent suicide. I wanted to do this sort of work in my practicum but also include a narrative component because a lot of the work done in mental health is quantitative. I decided to reach out to the HHL since it has a more holistic approach to research. I reached out to Deborah and she spoke about how the topic of suicide is very important to her. She wanted to work with me so we discussed how the project would be a narrative assessment of students, looking at how they talk and think about suicide and their own mental health. We wanted to know: What are the narratives and stories that students have? What do they tell themselves about suicide? We knew we needed to figure out how to have those types of conversations without contributing to the phenomenon of suicide contagion. Through a literature review, we realized bringing up suicide in conversation does not necessarily contribute to contagion – but being thoughtful and careful about how you direct conversations around suicide is always important. Ultimately, we developed two surveys on the topic, one for students and one for professors.

What do you hope to do with the results from your surveys?
Since they are pilot surveys, I hope to get more data that will show that more robust surveys on student mental health and emotional wellness are necessary. The wish is for more institutional backing in qualitative surveys on student wellness. Like I said, there’s a lot of quantitative information at Duke, for instance on student utilization at CAPS, but there needs to be a deeper dive into what students are thinking and feeling about their own wellness. I also hope we can do something with the initial data gathered from the student survey that’s out right now through January. Once the faculty survey has been rolled out, we can get information on how faculty are engaging with students in distress, in particular. Hopefully this can help change some faculty practices and what they see as important to student wellness as well.

How did your part in the HHL’s Narrative Medicine Mondays unfold?
Narrative Medicine Mondays came about because the HHL had been trying to get a narrative health working group off the ground for a while. Deborah wanted to discuss narrative medicine with students in a casual, more non-academic way. I told her that I was interested in narrative health and particularly in narratives that aren’t necessarily just textual, for instance, music, tv shows and movies. I worked with her on compiling a list of different media that engaged various mental health narratives. So, while I can’t entirely take credit for NMM, I helped push the idea along, added the mental illness component and expanded the “narratives” beyond books and articles.

How did you get involved with the HHL’s Neurodiversities Symposium?
I came to the Neurodiversities conference because I had told Deborah I wanted to present the work from my practicum. At the conference, I was on a panel about student resilience and mental health. It was me, Tom Szigethy, the director of Student Wellness, Danielle Oakley, the director of CAPS, and Marion Quirici, an HHL co-director who does a lot of disability access work. My component was sharing about NMM and the surveys but also linking a bunch of different people who were doing wellness work at Duke who I’d met with over the summer, including folks from the hospital and from the You@Duke project. My job was to act like a little window into all the people at Duke doing wellness work.

What do you hope to do when you’re done with your MPH degree?
I’m going to be working pretty soon with Harvard’s health services on their Graduate Student Mental Health survey. A lot of the work that I did for the Wellness Center and the HHL this summer I’ll be trying to incorporate here at Harvard. They have a survey already so I’m going to help them analyze their data but I’ll also bring a more robust approach by having a more qualitative background. I also plan to apply to PhD programs in Public Health and Population Health, Communications and Media Studies. 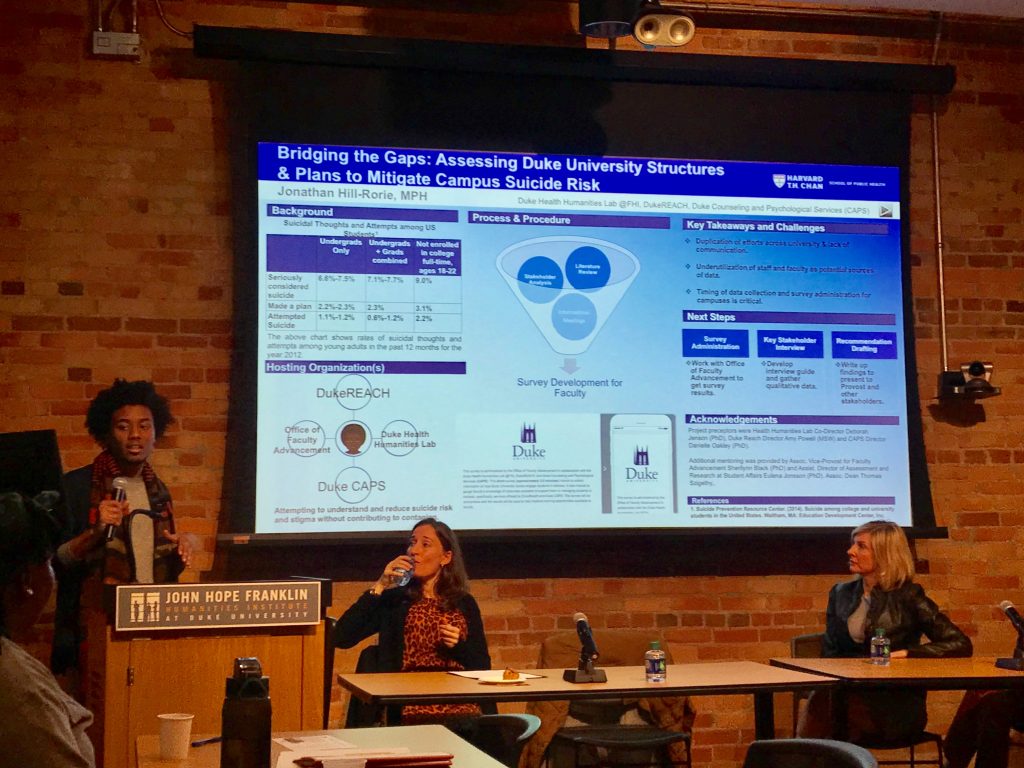