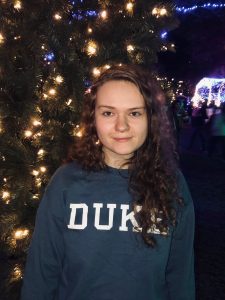 Anna Savelyeva (T’20), took the HHL’s course Storytelling in Medicine and Health. She’s been kind enough to share her final paper for the class with the HHL. It discusses medicine and the future of the humanities. Read it below.

“Health Humanities”: Medicine and the future of Humanities

The transition to a humanistic understanding of medicine and the application of science for the good of the person and not just the illness, has immense merit for the future of healthcare. Klugman and Jones both claim that the inclusion of the humanities in medicine and other fields of patient care can improve the lives of both patients and doctors. While Klugman argues that the medical humanities are the only way to prevent the humanities from falling to “irrelevance”, Jones focuses her argument on the etymological transition from the phrase “medical humanities” to “health humanities” and the universal benefits this small change can have on future physicians and patients.

Klugman supports his primary claim of saving the humanities by self-incorporation into medicine via recent statistics showing a decline in undergraduate commitment to liberal arts and humanities majors as well as low reported earning potential post-graduation. The majority of this aversion is linked to the concept of “employability” that Klugman discusses. The humanities are perceived by parents, students, as well as local and federal leaders to be without application (Klugman, 2017) or employability in a world that is striving toward efficiency and fighting an intimidating economic state.

While Klugman’s claim that framing humanities as “medical humanities” can strengthen the presence and appeal of humanities classes in undergraduate education, I believe that this framework could be detrimental to the study of humanities going forward. The humanities can be defined as “the study of how people process and document the human experience” (Stanford Humanities Center). Various fields fall under the title of “humanities”, including philosophy, religion, art, history, anthropology and others (Stanford Humanities Center). It is undeniable that human illness, death, and the nature of mortality can unite these fields to medicine and enrich the nature of medicine itself. However, this practice taken to an extreme can in turn narrow the scope of the expansion of human knowledge to only that which is deemed “relevant” and “applicable” to STEM fields. This will ultimately uproot the foundations of the humanities and undo the comprehensive analysis of the human condition that expands outside of the scope of medicine and into other tantalizing values of humanity including justice, ethics, politics, and many others.

Outside of illness and suffering narratives, the humanities have played a significant role in shaping human perception of identity, faith, and human consciousness. Through humanities, modern humanists have been able to render a picture of who we have been, where we are, where we are going. Humanities are also the basis of the tools that we use to pose the very questions that we deem relevant and applicable (Stanford Humanities Center). Without the evolution of logic and discourse and the classics, the modern theory of hypothesis and problem solving would most likely not look the same. These concepts would most likely not be held to the same regard or hold the same level of burden of proof as we have developed through the evolution of the humanities. At the heart of the issue, the humanities are the tools that humans have used to devise a civil society that seeks to understand the world through a process complemented [but not defined?] by logic and ethical inquiry.

Aside from the usefulness of the humanities as tools for forming critical thinking skills, the humanities are a way to understand the world from the multitude of experiences that are shared by peoples of different cultures, languages, backgrounds, and identities (Stanford Humanities Center). Although the customs and languages of two groups of people can be irreconcilably different, they are united by the fundamental framework of the humanities. The innate function of humanities is to be a conduit that connects the inexplicable nuances of diverse human experience in a way that can be imagined, felt, and ultimately understood.

If the practice of the humanities was fervently and only applied in the context of medicine, in medical humanities, or in the context of STEM, then the humanities could stand to lose about 90% of the depth and meaning that the fields bring to the historical and cultural context of the world along with the development of base critical inquiry skills. While I agree with Klugman’s claim that health humanities can be a way to bring the humanities to the level of applicability and relevance necessary for success, I also believe that this should only be a stopgap for solving the bigger issue at hand.

The problem with the humanities is the perception of the human use of these fields, as noted by Klugman (2017). The idea is that these fields are not as productive to economy, to mankind, and to future job seekers. Thus, post-graduates often find low earning potential and a general disillusionment with the societal treatment of humanists. The approach to saving the humanities is to reevaluate the value of humanist skills and the value of the products of their time. In this process, there is necessity in seeking the inherent value of the humanities as the only means of exploring the intangible human characteristics that can never fully be grasped through other methods. The uniqueness of the humanities in attaining and ascribing value to individuals and individual perceptions, rather than people as a set of statistics or molecules, should be unique enough to be categorized as a scarce resource and skill worthy of investment and merit.

However, I believe the incorporation of health humanities, done with adequate reverence and awareness, into the curriculum of future healthcare providers is essential to the success of healthcare in the future. Increasingly so, the study of medicine has been centered on basic science discovery and innovative technology that can improve diagnostics, treatment, and survival for patients. This innovative inquiry has reached a recent height in the hope of transferring physician ability to Artificial Intelligence machines (Ramesh, 2004). While the extent of this reality may only be a long-term eventuality, the belief that this reality would be better than the reality of the current healthcare belies an alarming trend. As computers and machines become “smarter” and are able to quickly and efficiently recognize the patterns associated with disease at a rate and accuracy much higher than that of human individuals, a new loss of humanity threatens the medical field.

The replacement of physicians with artificial intelligence is rooted in the belief that the mechanistic perfection of science and medicine is only limited by the imperfection of human skill. However, in this perception, the scope of the physician’s role as a provider, caregiver, and humanist is reduced and eventually entirely erased. In this perception, the context of the patient is also ignored and made irrelevant. The only thing that matters to machine is the biology, the patterns, and the symptoms. However, from the health humanities approach, bearing witness to the suffering of someone else, their life, their stories, and the nature of their pain are all skills that are uniquely human.

As a result, there is a continuing asymptote between mechanistic biology and physician care. While innovation and basic science research can forever expand into the realm of curing the illness, eliminating symptoms and improving health, these can never bridge the gap between curing the disease and the quality of patient life and recovery. At the same time, this gap also can never be met by just health humanities alone. These two factors come together to further delve into the wellness continuum in the same direction so as to accompany the patient on the journey into their own health continuum.

As a result, I believe that the future of undergraduate pre-med education should evolve to include a series of required classes, possibly several service learning courses that will challenge hopeful future physicians. I believe this is valuable not only to challenge the motivations of the average pre-medical student but also to enrich their motivations, to give new meaning to the idea of patient care and “helping people” which is so often casually claimed by most pre-medical individuals on the track.

As Jones discussed in her claims, the medical humanities address health determinants that physicians seldom consider. These factors, however, always influence the story and the treatment of the patient. Social factors such as class, education, occupation, environment, race, and stigma (Jones, 2017) create distinct environments for the treatment of patients and for the barriers that might exist between a patient and their physician caregiver. In addition to these considerations, Jones also proposes the consideration of disability studies in the health humanities which I think should also be included in the future of pre-medical and medical education. This particular leg of humanities is vital to future pre-medical students because it asks that students to shift the focus away from “fixing the broken” to “fixing attitudes” (Jones, 2017). This again an important distinction that establishes the role of the physician as not only an individual who is able to heal physically, but an individual who is able to advocate.

People who come to receive treatment from physicians desire healing, but at the same time what they need and want is an advocate who is willing to be there for them in their time of vulnerability and need. That individual must face the mortality of the person in front of them, regardless of the state of that person’s condition, and the physician must comprehend in such a way that the patient has been heard.

I hope that the future direction of pre-medical education is centered on the humanistic issues that surround individual patients. Along with pre-medical students, Jones emphasized the need for these concepts to be taught in other fields as “health humanities” in order to promote an overall sense of wellness across specialties and types of care. Ideally, these humanities courses would also involve service-learning components that would involve the student getting directly involved with the local community. The humanities are centrally involved in describing the person in a way that scans and charts never could. Ultimately, the focus of the physician should be to heal the person and leave room for the human condition; enough room that there is consideration for the diversity and nuance of stories.

About the Author: I’m Anna Savelyeva, from Austin, TX. I’m a junior Biology major with a concentration in Pharmacology and a minor in Chemistry interested in biomedical research and cancer drug development, especially in vulnerable clinical populations such as children and young adults. I took this class because regardless of what field I go into in medicine, I think it’s important for me to always consider that the story of the person, their values, and their quality of life, is just as important as their biology. The class was a really well-constructed amalgamation of understanding patient and physician experience, paired with an exploration of how we perceive health in our own lives. We worked through several texts and short stories about patients and doctors from various viewpoints, understanding both the beauty and the ugliness in the relationship. Toward the end of the class, we told our own stories, which was a poignant conclusion that taught me that the most common human experience is the open ended question of health in its many forms. This assignment was one of the final paper prompts to discuss how health humanities might help or hurt the “original” humanities, as well as to discuss the future of health humanities in undergraduate education geared toward those interested in health professions.