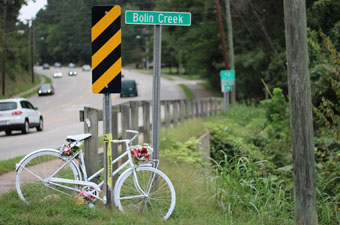 This Health Humanities Lab project immersed Duke students in the emergent relations between the city of Durham and those who live and move through it.  Its central object of concern was a bicycle. At road intersections throughout Durham, as in other cities around the world, there are bicycles that do not move.  They stand, often chained to stop signs, and are spray-painted bright white.  Called “ghost bikes,” they commemorate the lives of those killed on roads while cycling.  The bikes remind passers-by of a single event, a loss of life, much like crosses on interstate highways.  But they also offer a reminder of the ways that health is always anchored in specific political ecologies.

Students were immersed in and worked through multiple forms of intellectual inquiry organized around the numerous ghost bikes in Durham. They learned and applied methods and standpoints from epidemiology, geospatial mapping, ethnography, medical history, engineering, documentary film, urban geography, and humanistic studies of mobility, infrastructure, and the body.  As Durham and the Triangle area rapidly expand, traffic on the roads and “alternative” forms of transit are increasing concerns. These issues generally are debated as a problem of urban planning. Yet the ghost bikes index the collateral bodily damage tied to the history and rapidly-changing futures of mobility.