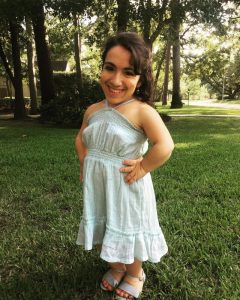 Cuquis Robledo graduated from Duke in 2017 with a B.A. in Psychology and received her M.A. in Interactive Media from Elon University in 2019. Her interest in Health Humanities stems from being a patient all of her life (two major spine surgeries and a leg surgery), and realizing the importance for doctors to communicate clearly with their patients, as well as her work with disability rights.

At Duke she was president of Duke Disability Alliance, where she worked on accessible issues on campus and promoted disability pride amongst the student body with HHL’s co-director, Marion Quirici. After she graduated from Duke, she went on to work for a disability protection and advocacy organization called Disability Rights Washington in Seattle, where she was in charge of the Storytellers Series for the Rooted in Rights Team. It was working with Rooted in Rights that she discovered her love of storytelling. For the Storytellers Series, she taught people with disabilities how to create their own advocacy videos. At the same time, she produced her own advocacy videos on topics such as Little People employment, and the right to have an accessible graduation ceremony. She is most known for spearheading the #CrappyCurb campaign, which pointed out the lack of accessible curb cuts in the City of Seattle for people with disabilities.

After working at Rooted in Rights, Cuquis went on to learn more about different forms of storytelling, particularly video and motion graphics. She traveled to Bogota, Colombia with a team to develop a website for a non-profit that hires and pays people with disabilities above a minimum wage called, Proyectos Tecnovo. There she directed and edited the videos for their website. Two of the videos won a Bronze and Gold award in Directing and Cinematography at WorldFest-Houston International Film Festival, as well as have been selected for the Indie Short Film Festival.  Cuquis also traveled to Puerto Rico in March of 2019 and produced, directed and edited an interactive multimedia documentary entitled Maria about the effects of Hurricane Maria on the island of Puerto Rico. This project has been selected, nominated and has won awards for Best New Media from IMDb recognized festivals, including Indie Short Fest, Independent Shorts Film Festival, Five Continents Film Festival, and the Official Latino Film Festival.

In her spare time, Cuquis loves to act, Latin dance and has occasionally competed in regional competitions back home in Houston, TX.  Click here to learn more about her work.