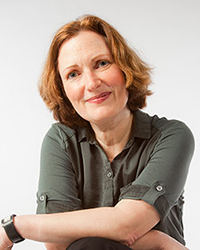 Deborah Jenson (PhD Romance Languages and Literatures, Harvard University, 1994) is Professor of Romance Studies and Global Health at Duke University. She also served as Director of the Franklin Humanities Institute (FHI) through 2017. Her work in post-revolutionary French and Haitian literature and culture has always engaged with trauma on a literary level, but after the Haitian earthquake of 2010, she began researching global mental health, cholera,and neurodiversity, leading to her secondary appointment at the Duke Global Health Institute. She co-founded and co-directed the Duke Neurohumanities in Paris Global Education Program from 2012-2016, and co-leads the FHI/DIBS Neurohumanities Research Group. Her current health humanities work focuses on the Haitian role in the creation of ethnopsychiatry, and French novelists’ representations of their own health experiences in their characters’ bodies. Books include: Trauma and Its Representations: The Social Life of Mimesis; Beyond the Slave Narrative: Politics, Sex, and Manuscripts in the Haitian Revolution; Poetry of Haitian Independence (with Kadish and Shapiro); and Unconscious Dominions: Psychoanalysis, Colonial Trauma, and Global Sovereignty (with Anderson and Keller). Recent articles include “Living by Metaphor in the Haitian Revolution: Tigers and Cognitive Theory” in The Haitian Declaration of Independence (ed. Gaffield) and “Adrian and Marcel Proust: Fathering Neurasthenic Memory” in Being Contemporary (ed. Brozgal and Kippur). A co-authored book with Bonnie Kaiser, Hunter Keys, and Brandon Kohrt is forthcoming on Trauma and Mental Health in Haiti: Humanitarian Emergencies (Routledge).