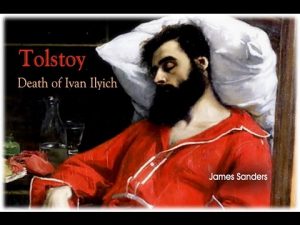 I sat down with HHL co-director, Neil Prose, to discuss his relationship with Leo Tolstoy’s short book, The Death of Ivan Ilyich. Every year Dr. Prose teaches this book in his FOCUS course. I found out that the novel has much to offer, including wisdom on provider-patient communication, living a life with meaning and more.

Note: This interview has been edited for clarity.

Tell me about yourself.
“My name is Neil Prose and I’m a professor of dermatology and pediatrics at Duke. I’m also a research professor at the Duke Global Health Institute and co-director at the Health Humanities Lab. I teach a course for Duke undergraduates on empathy, the human connection, healthcare and healthcare communication. It’s called “Singing the Same Song.” We look at the communication between patients and healthcare providers in the U.S. and at healthcare in low and middle income countries. Other issues we study include: healthcare disparity in the U.S., immigrant health, and queer health.”

Tell me about when you first read The Death of Ivan Ilyich.
“The first time I read the book was probably 10 or 15 years ago. I’d just begun teaching medical students about patient-provider communication. I was completely blown away by the depiction of Ivan’s relationship to his doctors, the lens into Ivan’s character and even more so, by the courageous way in which Tolstoy asks us to look at our own mortality. He has us think in a way we often try to avoid. He forces us to face the fact that we’re all going to die. He begs the question: what to do with this knowledge? And, what happens when people ignore that reality instead of using it to help themselves live the most meaningful life possible?”

Tell me about how you teach The Death of Ivan Ilyich.
“The book is a wonderful teaching tool because it highlights all of the issues that I focus on in my course. It’s about the illness of a single patient — the protagonist, Ivan Ilyich — his suffering, and his death. In my course we talk a lot about the ways in which doctors and nurses and other healthcare providers look at illness aka, with lots of science and terminology and jargon. And then we delve into the contrast of the patient’s lifeworld: his concerns about his illness, financial issues, emotions and family. The Death of Ivan Ilyich is a perfect teaching example for this because it’s a very complex portrait of the lifeworld of one character. The world of medicine enters only very occasionally—in the form of several doctors who visit Ivan to diagnose and treat his illness. The ways that the doctors act towards their patient are very emblematic of the way that many doctors act towards their patients today. It’s very sad and upsetting because these doctors ignore Ivan’s feelings and belittle his questions. Ivan leaves these visits feeling more worried and confused then when he got there. So, the book serves as a case study in the provider-patient conversation. But the book is much bigger than a case study. It’s also a very complicated treatment of the issue of life and death and meaning. Throughout the novel Ivan remembers his life. Historically, Ivan lived just to please society and to move up in salary and position. But as Ivan suffers through his terminal illness, he starts to see the ways in which his life lacked the meaning that he hoped for. By contrast, his servant Gerasim, who’s not a healthcare provider, actually enters the room and supports Ivan by raising his legs to minimize his pain. He’s the only person in the book who really manifests caring. The book really looks at the issue of living a life with meaning, living an examined life, and the sadness of not doing so.”

Can you talk about the HHL documentary you’re working and how the character Gerasim relates to it?
“I’m working on a short documentary called Keepers of the House. It’s full of interviews with housekeepers in hospitals and how they participate in the healing of patients. We’ve collected stories about housekeepers bringing food to patients, singing to patients, praying with patients and developing friendships with patients that last after the patient leaves the hospital. These housekeepers remind me of Gerasim from the novel. Housekeepers, like Gerasim, do so much more than cleaning and sanitizing. A certain number of them see their job as a vocation. They craft their job to include aspects of healing and caring. This is exactly what Gersim does. He’s a peasant but he takes it upon himself to become involved with Ivan and his healing. It’s fascinating to contrast Ivan and Gerasim. Ivan has accumulated a lot of money and power but cannot find any meaning in his life. Meanwhile, Gerasim seems to be very happy with his role as a peasant because he’s doing something that feels meaningful. I think that the same contrast exists in our own society today. Some people believe that having the highest possible salary and the most impressive title will create happiness. But the search for happiness is much more complex than that. It’s much more involved with finding a life that has meaning rather than one with financial success. This film carries a really important story that’s gone un-documented in the world of health. I hope it will serve as the centerpiece for a curriculum for doctors, nurses, other healthcare providers and students. It’ll teach people about teamwork, empathy and humility.”

When did you realize that Gerasim was so related to your film?
“I only realized this the last time I read the book—last week. I’d never made the connection even though I’ve read the novel 10 or 15 times. Just before rereading last week, I came across an article in the New York Times “Wealthy, Successful and Miserable.” It’s about how wealth isn’t necessarily tied to happiness or meaning. After reading that article and then picking up The Death of Ivan Ilyich again, I realized the connection. So the inspiration for the film wasn’t Tolstoy. It was actually a conversation I had three years ago, with Ray Barfield – a physician here at Duke – about our mutual observation of housekeepers here at Duke Hospital.”

Tell me about your vocation. Why did you enter pediatric dermatology?
“What I love about my work as a clinician is the joy that comes from caring for children and their families. I like dealing with problems which are, for the most part, interesting, manageable and treatable. So I feel that I really impact people in a positive way. But even though I’ve been a pediatric dermatologist for years, that doesn’t mean it’s my one and only ‘vocation.’ Vocations are more complex than that. My message to young doctors and students is that you have to keep looking for your vocation. It’s not going to be the same for your whole life. For me, pediatric dermatology was a vocation when I was much younger, and it still is to some extent, but now I feel much more called to work on issues of empathy, communication and global health. So keep looking for what you care about. One has to keep an open mind and ask: ‘What do I care about now?’ ”

***Keepers of the House will be coming out later this year.