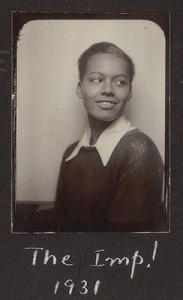 “I have never been able to accept what I believe to be an injustice. Perhaps it is because of this I am America’s problem child, and will continue to be.” 1

In the self-titled photograph “The Imp!” Murray poses for the camera grinning slyly over her should as if content with her past actions and unafraid of her future, aware that she is causing a ruckus. Pauli Murray knew that fighting against social injustices involved upsetting the status quo. She sought admission to the University of North Carolina’s graduate school in 1938 despite their white supremacist policies that barred people of color from entry. Frank Porter Graham, the University’s president, was unsure of what to do with such a qualified applicant and sent a letter to the state Senate seeking advice. She was not admitted and even decades later refused to accept an honorary degree the University offered to her.

Murray rebelled against racist seating assignments on a bus to North Carolina and segregated restaurants in Washington D.C. She barnstormed the south raising funds to support the legal team representing Odell Waller, a black sharecropper executed for killing his white landlord in self-defense. Pauli Murray, inspired by the civil rights lawyers she met during this campaign, decided to enroll in law school. She graduated at the top of her class at Howard Law, earning the prestigious Rosenwald Fellowship. She then applied to Harvard for further study. She was denied admission because of her gender despite a support letter from President Franklin Roosevelt.

Pauli Murray was outspoken about sexism in civil rights movements and protested against the exclusion of issues relevant to women of color in feminist movements. She honored all of her identities, crafting her vision for social change based on her own experience as a mixed-race woman and member of the LGBTQ community.