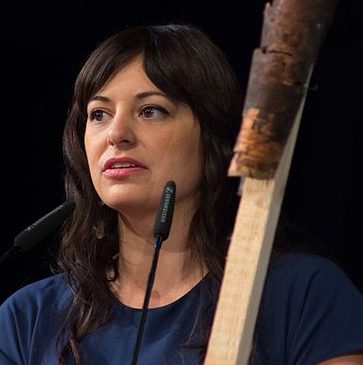 Candice Hopkins is a curator and writer of Tlingit descent originally from Whitehorse, Yukon. She is Senior Curator of the Toronto Biennial of Art and co-curator of the 2018 SITE Santa Fe biennial, Casa Tomada. She was a part of the curatorial team for documenta 14 in Athens, Greece and Kassel, Germany and a co-curator of the major exhibitions Sakahàn: International Indigenous Art, Close Encounters: The Next 500 Years, and the 2014 SITElines biennial, Unsettled Landscapes in Santa Fe, New Mexico. Her writing is published widely and her recent essays and presentations include “Outlawed Social Life” for South as a State of Mind and Sounding the Margins: A Choir of Minor Voices at Small Projects, Tromsø, Norway. She has lectures internationally including at the Witte de With, Tate Modern, Dak’Art Biennale, Artists Space, Tate Britain and the University of British Columbia. She is the recipient of numerous awards including the Hnatyshyn Foundation Award for Curatorial Excellence in Contemporary Art and the 2016 the Prix pour un essai critique sur l’art contemporain by the Foundation Prince Pierre de Monaco. She is a citizen of Carcross/Tagish First Nation.

Candice Hopkins In Conversation with Pedro Lasch and Shambhavi Kaul