Jussi Parikka (@juspar) very kindly sent me a copy of his new book, What is Media Archaeology? (Polity, 2012). As I’ve come to expect from Jussi’s work, it is a thoughtful exploration of media archaeology’s main ideas that balances clarity and complexity. No easy task, given how many disparate threads of theory come together under the banner “media archaeology.”

In the context of the Soundbox project, I want to draw attention to one chapter in particular: “Mapping Noise and Accidents,” a chapter on “disturbances, on anomalies of media culture” (91). As Parikka points out, during the early twentieth century, when audio recording technologies began to go mainstream, “the issue of noise expanded from being just an unwanted element to a more defining feature in how sound is being understood, as well as the knowledge of sound cultivated” (94). For instance, the rhythms and sounds of mainframe computers during WWII helped engineers detect problems, “bugs” in the system — a technique known to anyone who’s heard her harddrive physically crash. (Kirschenbaum makes a similar point in Chapter 2 of Mechanisms). In fact, noise is a crucial component of Claude Shannon’s well-known theory of communication: 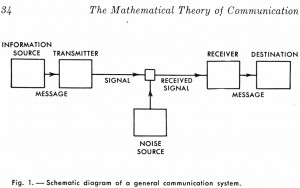 Here, as Parikka notes, noise is not positioned outside communication — as something external and undesirable — but as essential to it. That is, with Shannon’s theory, “noise and incompleteness were beginning to be considered as integral to any functioning system” (97). Following this comment is a quote from information scientist Warren Weaver emphasizing the importance of redundancy:

Since [the] English [language] is about 50 per cent redundant, it would be possible to save about one-half the time of ordinary telegraphy by a proper encoding process, provided one were going to transmit over a noiseless channel. When there is noise on a channel, however, there is some real advantage in not using a coding process that eliminates all of the redundancy. For the remaining redundancy helps combat the noise. This is very easy to see, for just because of the fact that the redundancy of English is high, one has, for example, little or no hesitation about correcting errors in spelling that have arisen during transmission. (quoted on Parikka 98)

I love the Weaver points out how English’s redundancies — ostensibly undesirable and inefficient — actually help us communicate in noisy environments, whether it’s through an electronic channel or in a crowded bar. This is a useful way for this project to think through our parallel interests in noise, materiality and digital technologies, bringing the friction back to ostensibly frictionless systems.