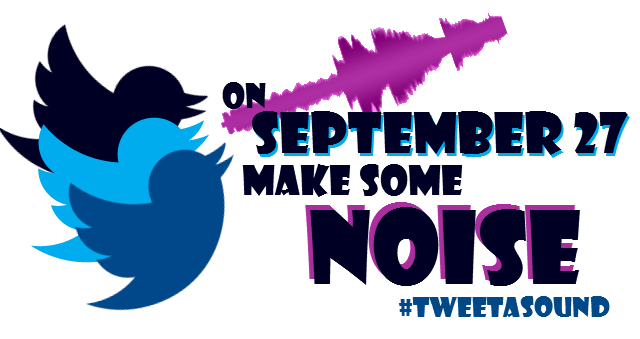 When the Soundbox team first discussed #TweetaSound — our experiment of tweeting in sound for a day on September 27th — we decided against giving a list of tools that might be used for audio tweeting. We wanted “tweeting in sound” to remain a capacious concept, not simply equivalent with “posting a link to an audio clip.” Yet part of the goal of Soundbox is to connect people and technologies in meaningful ways. With that in mind, we’d like to offer up a few inspirational twitter+sound experiments, and point you in the direction of a few tools we’ve discovered.

TwtrSymphony is a project in which musicians use Twitter to collaboratively record a song. Each musician posts an audio clip, 140 seconds or less, of their part; then all the bits are gathered and imposed atop one another to create a short symphonic piece. It’s interesting to me that listening to the final piece gives you no sense of the constraints and distributed labor that went into the production of the piece. How is Twitter being used as both a social and sonic platform in this project?

sc140 is a collection of SuperCollider pieces written in 140 characters of code or less. (SuperCollider is a programming language used for real-time audio synthesis and algorithmic composition.) How have the constraints shaped the music? What possibilities are opened up under the 140-character code limit?

365 Musical Tweets was a year-long project by composer Mikel Chamizo to write 365 pieces for piano (one a day during 2011) with 140 notes (or chords) or less. Some of them are quite beautiful. It’s interesting how he’s translated characters into notes, remediating the platform to match his own compositional style.

Chirbit, Audioboo, Shoutomatic, and Soundcloud allow you to record an audio clip then send it directly to social media platforms. They’re all free but require sign-up/log-in. Audioboo and Soundcloud can also be downloaded as apps, so you can record and post on-the-go.

Something a little bit different is Audio Tweet. You type a text message (140 characters or less), and it converts it to audio. Like this!

As I was preparing this post, sifting through various link lists, I noticed that over half of the services I found had already gone dead. This doesn’t bode well for the archival longevity of audio sent using any of the younger sites listed above — or, in fact, any of the sites listed above.

Moreover, none of the audio sharing services above will restrict your length to anything like 12 seconds. We’ve imposed this limit as a way of playing with Twitter’s constraints in a sounded space but in some ways, of course, 12 seconds is arbitrary, based on our best guess of what 140 characters equates to in sound. Twitter’s constraints are an artifact of SMS; what would be a comparable constraint in the audio world?