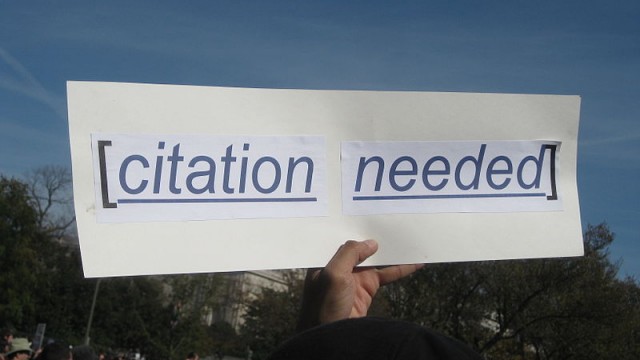 SoundCite is a tool that allows users to embed in-line audio into a text. I was very excited when I first heard about this because it introduces a way to keep listeners immersed in a story/narrative. Instead of directing them away from the text (by clicking on a link that takes them to a sound file), it keeps listeners right in the action. While I think it is a potentially useful tool in a lot of ways, I encountered a few problems as I was working on an audio narrative project for SoundBox. I wanted to share my thoughts here for others to consider as they search for ways to enhance their own projects.

First, in order to use SoundCite in your text, your sound file must be housed in SoundCloud. SoundCite’s reliance on SoundCloud is a pretty serious limitation. For example, since I was working with sound clips from different sources (the FreeSound Project, for instance), I was unable to use SoundCite for the majority of the audio files in my text. I could have chosen to upload my own field recordings to SoundCloud and link the sounds I borrowed from other sources to the original pages they came from. However, that would have defeated the purpose of keeping the listener in the moment. SoundCite may expand beyond SoundCloud eventually, but for now it is important for authors to consider in advance whether or not using SoundCloud would make sense for their work.

Second, SoundCite is not yet compatible with iPads, smartphones, or any iOS devices. As stated on the SoundCite website: “SoundCloud’s widget system requires Flash. On iOS devices, users will not notice your SoundCite clips, because sound will never load.” Considering the amount of sound consumption that takes place via iOS devices, this seems like another serious limitation (especially if you are trying to reach a wide audience).

Despite its drawbacks, I think SoundCite has great potential and it’s important to remember that it is still a new tool that will most likely undergo changes for the better. Before diving into SoundCite-inspired project, though, I would recommend figuring out if the limitations I discussed will end up diminishing your work.

Soundbox contributor Steph Ceraso received her Ph.D. in English from the University of Pittsburgh, specializing in rhetoric, composition, pedagogy, and digital media. Her work examines listening as a full-bodied, multimodal practice and aims to expand conventional notions of listening that emphasize the ears while ignoring the rest of the body. She is generally interested in how more fully embodied modes of listening might deepen our knowledge of multimodal engagement/production. Steph currently teaches at Georgetown University. Her audiovisual piece “A Tale of Two Soundscapes: The Story of My Listening Body” will appear in the Soundbox’s Pro-vocare web publication later this academic year. You can find more about her research, audio projects, and teaching at www.stephceraso.com.