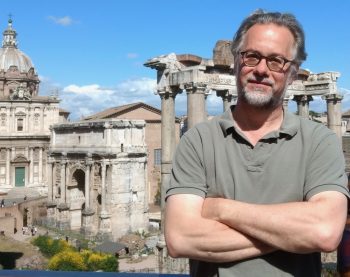 William A. Johnson is the current Dean of Humanities and a Professor in Classical Studies at Duke University. He works broadly in the cultural history of Greece and Rome, with particular interest in ancient books, readers, and reading, and with a general interest in how literary pursuits intersect with cultural context in antiquity. He has lectured and published on Plato, Hesiod, Herodotus, Pliny (both Elder and Young), Gellius, Lucian, and on a variety of topics relating to books and readers and publishing, both ancient and modern. He has also focused on ancient music (see Ancient Music Web Site). He has published five books including Readers and Reading Culture in the High Roman Empire (2010), Ancient Literacies (2009), and Bookrolls and Scribes (2004). He teaches a wide range of Greek and Latin topics to undergraduate and graduate audiences at Duke.