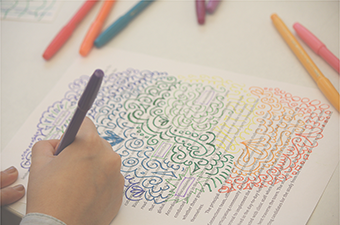 This project was part of HHL co-director Kearsley Stewart’s course, “GLHLTH 302 – Narratives of Living with HIV/AIDS.” For this project, students used Tom Phillips’ famous art book A Humument, a life-long project now in its sixth and final edition, as a starting point. In his book, Phillips collaged, painted, and deconstructed each page of a long-discarded Victorian novel to create a new text. A Human Document became the go-to text for most of Phillips’s multi-media art for 50 years, and its main creation has been A Humument, what Phillips calls ‘a treated Victorian novel’.

After the students chose their original texts, they scanned the original documents to print facsimiles for their projects about HIV/AIDS. Upon completing their final pieces, they were asked to write essays (“Final Reflections”) in the form of a third-person review, in which the artwork, and the intent behind the piece, is described. Students were prompted to reflect on why the artist (themselves) had chosen the original document and how the artwork, with its final word choices, transformed the meaning of the original document or helped them (and the viewers) gain fresh insights.

The completed student artworks were framed and then displayed in a public, high footfall exhibition space called the Student Wall, located within Perkins Library at Duke University for a two-month period. In addition, three students presented their pieces during a World AIDS Day event at Duke University Library, which was open to the general public.

Kearsley had two goals in using the Maria de Bruyn collection in her undergraduate seminar on global narratives on HIV and AIDS: 1) to challenge global health students to conduct archival research in a new and unique way and 2) to encourage them to learn lessons from the past in how global health issues have been addressed both by the people affected and those working to mitigate and end these problems.

Clips and Video from the Humument Project 2016