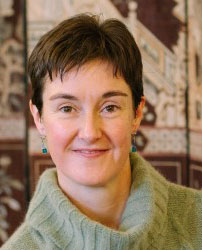 Nicole Elizabeth Barnes, PhD, Assistant Professor of History and a Core Faculty Associate of the Health Humanities Lab, is a living legacy of the epidemiological transition. Her paternal grandmother lost five of her siblings to disease—three in their infancy to unknown illnesses, and twin sisters who contracted tuberculosis at the age of seventeen. Nicole, by contrast, did not have a personal experience with death until her grandparents passed away. She therefore feels extremely grateful for the clean tap water, Pasteurization, antibiotics, vaccines, and aseptic midwifery practices, which inform both her health and her scholarly curiosity on the epidemiological transition in global modernity.

Nicole received her PhD in 2012 from the University of California, Irvine and is currently completing her first monograph, The Cleanest Asians: Wartime Nursing and the Birth of Modern China, 1937-1945. She speaks mandarin Chinese, as well as French and Spanish, and frequently travels for research and teaching in China, Taiwan and Europe. Nicole also turns first to Chinese medicine when she is ill and has undergone acupuncture treatments, cupping therapy and scraping dozens of times. She has also brewed her own Chinese herbal medicine and enjoys its bitter taste. Her interest in Chinese medicine might be related to her mother’s use of homeopathic medicine throughout her childhood. Nicole vividly remembers how her mother pulled a big, Bible-like black book out of a special cabinet, asked about her symptoms, tenderly took her temperature, and selected a precise number of tiny white pills that tasted of sugary chalk from a series of little brown bottles in her medicine cabinet.

Nicole regularly teaches a course on the history of Chinese medicine, and is beginning work on a new book tentatively titled, A People’s Medicine: China and the Foundations of Global Health. This book follows both Chinese and Western medicines as they developed in China from the era of global leftism in the 1920s through the end of the Cold War in the early 1990s. It uncovers the overlooked legacy of Chinese rural public health activism that inspired the foundation of the World Health Organization in 1948.