As an exciting outgrowth of the Duke-NCCU Digital Humanities collaboration, NCCU Professor of Postcolonial and South Asian Studies Matthew A. Cook organized a DH exchange program through the American Institute of Pakistan Studies that brought a small delegation of NCCU faculty (all Duke-NCCU DH alumni) to Lahore, Pakistan, in early May 2019 and a group of 5 Pakistani fellows to North Carolina for a month-long residency later that summer. Duke’s Victoria Szabo and Hannah Jacobs also played their part. For more details on the exchange and its institutional contexts, see Cook’s summary here. In the following post, Professor of English and 2018-19 Fellow Michele Ware offers a more personal take on hosting the Pakistani faculty visitors.

“Such journeys have convinced me that it is not always possible to restore one’s boundaries after they have been blurred and made permeable by a relationship: try as we might, we cannot reconstitute ourselves as the autonomous beings we previously imagined ourselves to be. Something of us is now outside, and something of the outside is now within us.”

After all our weeks together, we wanted to give our friends from Pakistan a day of relaxation and fun, and it was Collie’s idea to spend their last day in America at Falls Lake, kayaking and swimming. It was the perfect day for a picnic by the lake. Though it was hot and the sun was out, compared to a Pakistani summer, the temperature in the 90s was mild to our friends, and there was enough cloud cover to keep us comfortable.

With two kayaks for nine people, we had to take turns. And Collie was really the only experienced kayaker, so we sorted ourselves out. We four mentors—Collie, Brett, Russell, and I—could all swim, so one of us would always be out on the water with one of the Fab Five—Ayesha, Ibrahim, Marvi, Sania, and Shumaila. But let’s be clear—almost all of us were beginners, and it didn’t take long for the first hiccup. Brett, at 6’5”, was really too big for the kayak, and he went over almost immediately. Russell, too, managed a man-overboard moment when he was out of sight around a bend, and Shumaila paddled back alone in her kayak to get some rescuers. I had a calmer, more meditative turn around the lake with Ayesha; we startled a great blue heron into flight as it was fishing in a hidden cove. I couldn’t help thinking how brave everyone was, venturing out into the deepest parts of the lake, uncertain, inexperienced, but bold and enjoying every bit of the adventure. And helping each other at every turn—getting in and out of the kayak in the muddy bank without falling in, generously sharing the kayaks (though we all wanted to be out on the water), taking pictures, fetching towels and shoes and hats for each other. Shumaila told me that there were such places in Pakistan for outdoor water sports, “but not for women.”

After eating, we knew that the day was coming to a close, but no one really wanted it to end. Marvi, the most intrepid of all, had already had a swimming lesson earlier from Collie and Brett, and she wanted to go back to the roped-off swimming area. We still had an hour or two left, so we all made our way to the beach.

None of the women could swim, but all of them waded into the water, fully dressed, modest of course, in long sleeves, long pants, two with hijabs in place. Though hesitant at first, they gained courage more rapidly than I was prepared for. Collie, Brett, and I were strong swimmers, but making sure everyone was safe was an issue. After some thrashing around, I thought that life-jackets were in order. They were the old-fashioned type, large, orange, and bulky, with belts that fastened around the waist. Once the women had these on, we three mentors who could swim felt much more at ease, especially when Marvi, Sania, and Ayesha drifted into water over their heads. Even Shumaila ventured out, floating serenely on her back off by herself, staring up at the sky. Ibrahim waded in the shallows and watched over us, taking pictures.

In retrospect, it’s hard to remember the long drive home. We were wet and tired and dreading the next day when we would have to say goodbye. What I remember most: Sania laughing, laughing, laughing, sputtering helplessly, but delighted to be in water that was over her head. Ayesha lying on her back oh-so-elegantly, floating in the cool water with a radiant smile. Shumaila, solitary and self-contained, eyes closed and arms crossed over her chest. Marvi dipping her face into the water, over and over again, surfacing and saying, “I have never felt so free.” 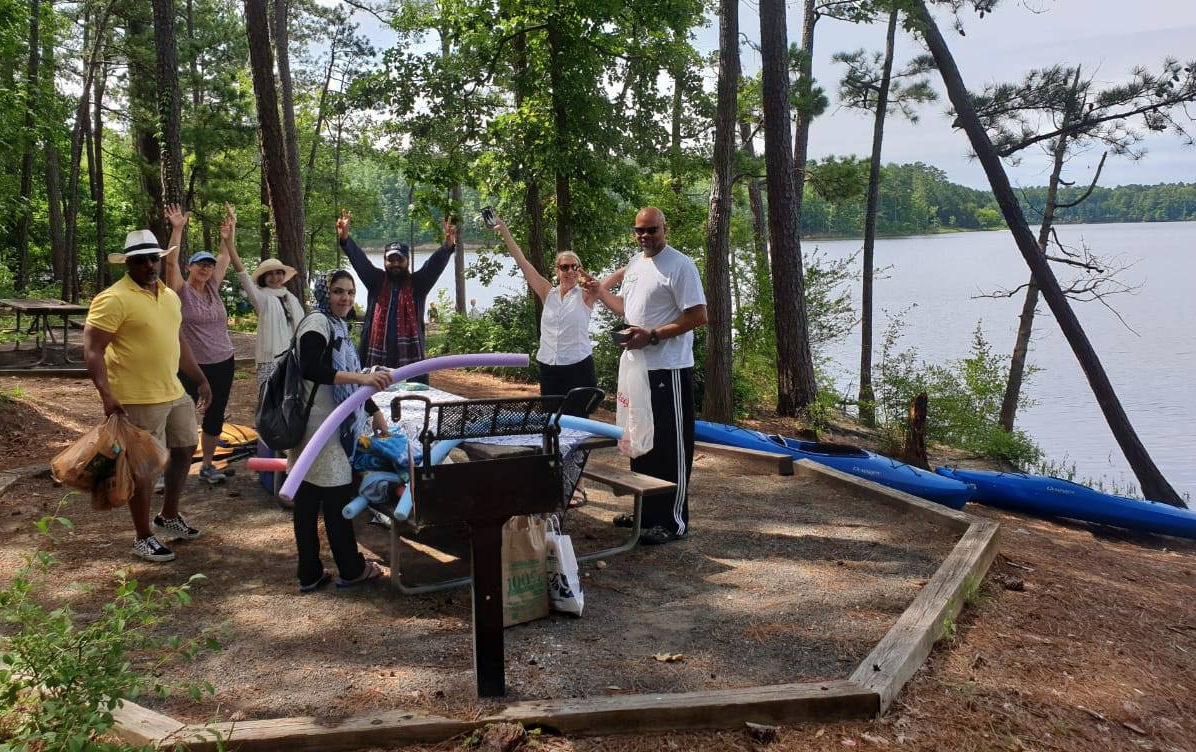